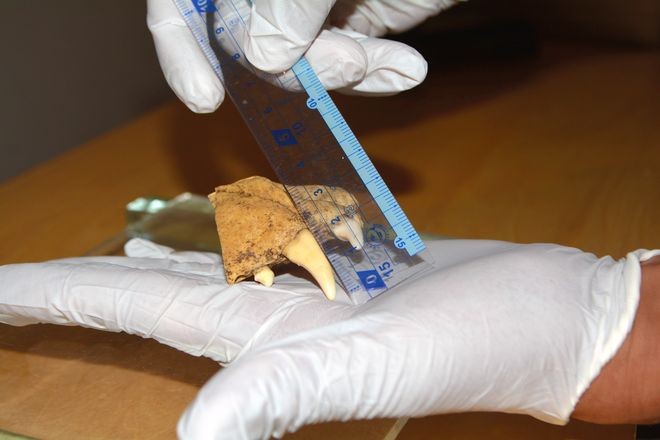 Researchers measure a canine tooth presumed to be from an extinct Japanese wolf in Omachi, Nagano Prefecture, on June 29. (Yukio Kondo)

OMACHI, Nagano Prefecture--Fangs deemed to be from an extinct Japanese wolf species that people in bygone times wore as talismans to ward off evil were found by a curator combing through the collection of the city-run Omachi Alpine Museum here.

“The teeth are unlikely to have come from dogs, foxes or bears,” said Hiroshi Yagi, 71, a visiting researcher at the Mitsuminesan Museum in Saitama Prefecture outside Tokyo who examined the photos of the fangs. “The features strongly suggest they are the teeth of a Japanese wolf.”

The specimens, the only ones of their kind from the Daihoku region in northwestern Nagano Prefecture, were stored at the Omachi Alpine Museum and listed as “wild canine fangs” under the folk material category.

A skull’s nose tip with the two fangs on the right and left sides was in a paper bag with a crystal. One of the teeth is 2.2 centimeters long and about 1 cm in diameter.

They were believed to have been initially discovered in what is now Omachi between the late Edo Period (1603-1867) and the Meiji Era (1868-1912). It was customary in those days for local folk to wear the teeth of wolves to protect them from evil when passing through mountains and forests.

The skull’s nose tip was donated by the owner, a resident of Ikeda in Nagano Prefecture, to the Omachi Alpine Museum in 1982.

The teeth were “rediscovered” after an Asahi Shimbun reporter contacted the museum to inquire about an April 8, 1957, article in a local newspaper’s evening edition detailing the museum’s plans to search for evidence Japanese wolves still existed.

Though the museum couldn't confirm that the survey went ahead as planned, Yuta Kuribayashi, the museum's 32-year-old curator in charge of animal-related displays, got interested in the canine variant and began searching the museum’s storage facilities. He found the fangs in April.

Kuribayashi is pushing for the rediscovered fangs to undergo DNA analysis to confirm whether they are indeed from a Japanese wolf.

Japanese wolves are thought to have died out soon after the last one in the wild was caught in Nara Prefecture in 1905.

More than 100 skulls of the species are estimated to exist nationwide. Yagi said he has studied 70 or so Japanese wolf skulls from Tokyo, Hokkaido and 23 prefectures across Japan.

Yagi, who heads a nonprofit organization dedicated to finding Japanese wolves based on the belief that they still exist, intends to visit the museum after the novel coronavirus pandemic dies down to “check the teeth with my own eyes” for a more accurate analysis.

“Wolf skulls were apparently used to treat people believed to be possessed by fox or other animal spirits,” Yagi said.

He noted that rudimentary “netsuke” ornaments were often fashioned from the snout of a wolf to help dispel evil. Yagi speculated that may explain the presence of the teeth at the Omachi Alpine Museum.

“Wolf skulls exist in the southern Nanshin region and elsewhere in Nagano Prefecture,” Yagi said. “Searching areas around Omachi is bound to lead to the discovery of more remains, too.”

Museum officials, intrigued by the thought that “other Japanese wolves’ skulls may be in hands of old-established families and other venues,” are looking to gather more information on wolf remains from now on.

“Omachi, situated at the foot of the Northern Alps, is home to abundant nature,” Kuribayashi noted. “I want to amass more evidence to show that Japanese wolves once roamed the area.”