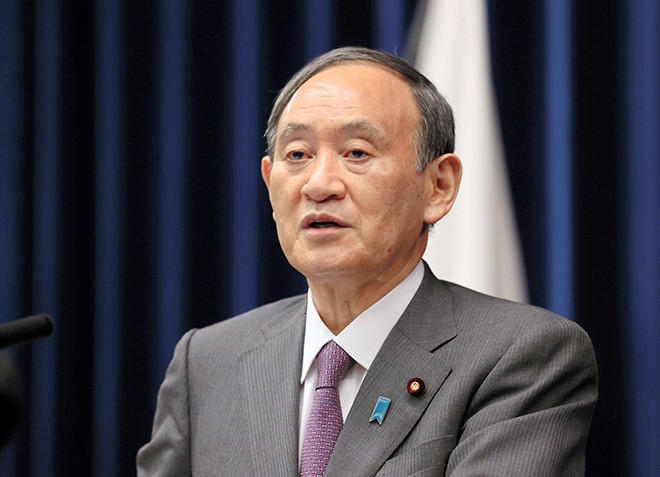 Prime Minister Yoshihide Suga talks about the expansion of the state of emergency at a news conference at the prime minister’s office on Aug. 25. (Pool)

Prime Minister Yoshihide Suga decided to add eight more prefectures to the state of emergency list on Aug. 25, but also said that he has “begun to clearly see light” at the end of the tunnel in Japan's battle against COVID-19.

Pre-emergency measures will be additionally placed on Kochi, Saga, Nagasaki and Miyazaki prefectures.

The expansion of the state of emergency and pre-emergency measures will be applied from Aug. 27 to Sept. 12.

“(I) have begun to clearly see light (at the end of the tunnel)," Suga said during a news conference. "I will decide whether to extend the declaration ending on Sept. 12 by analyzing the COVID-19 vaccination progress, the number of patients with serious conditions, the bed occupancy rate and other factors.”

Suga also raised the prospect of vaccine passports as part of Japan's path back to normalcy.

“We will consider regaining our daily lives and social-economic activities, such as going to eating and drinking establishments, and events, and taking trips, by using vaccine passports actively,” he said.

Shigeru Omi, chief of the government’s expert panel on the response to the COVID-19 health crisis, also attended the news conference. Commenting on the timing for lifting the state of emergency, he said, “The most important thing is how much the strain in the medical care system will be alleviated.”

Suga declared that he will decide to use a reserve fund of 1.4 trillion yen ($12.73 billion) for countermeasures against the new coronavirus within this week.

“We will respond to urgent tasks, such as the vaccination efforts and procurement of neutralizing antibody drugs.”

Suga also spoke about measures to prevent children from getting infected. “The central government won’t ask all schools in Japan to close down at the same time,” he said.

But he also said that he will present guidelines swiftly to allow schools and municipal governments to properly decide on whether to suspend schools when infections occurred there.

Omi, at the Lower House’s Committee on Health, Labor and Welfare on Aug. 25, said, “Each municipal government should decide whether to postpone to some extent the date when schools will start after the summer break.”

It also urged them to ask municipal governments to give special consideration to teachers who want to get inoculated to accelerate their vaccinations.