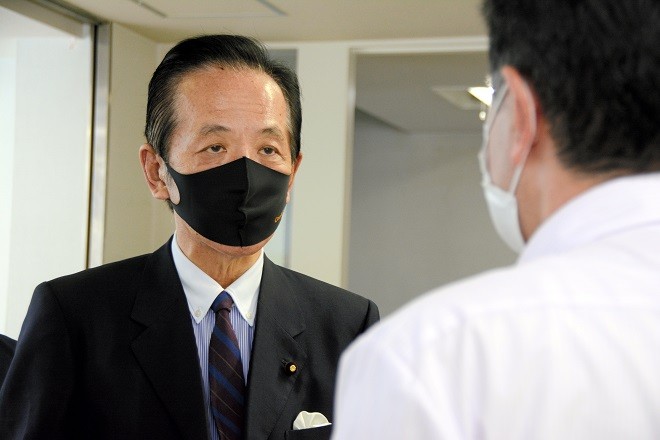 A veteran lawmaker once known as the “prince of the Liberal Democratic Party” worked tirelessly behind the scenes to help the opposition net a landslide victory in the recent Yokohama mayoral race.

Kishiro Nakamura, 72, who currently serves as a Lower House member of the main opposition Constitutional Democratic Party of Japan (CDP), ran a cloak-and-dagger campaign to undermine the LDP’s support, while at the same time taking younger opposition politicians under his wing to show them the ropes.

“Prime Minister Yoshihide Suga fully devoted himself to the campaign in the mayoral election,” Nakamura said during an interview with The Asahi Shimbun. “The vote is thus not a mere regional election. We are succeeding in turning the tide in our favor.”

Takeharu Yamanaka, 48, endorsed by the CDP, emerged as the winner on Aug. 22.

Not getting carried away by a single victory, Nakamura is setting his sights higher, as the CDP is struggling to gain widespread appeal despite the Suga administration’s sluggish approval ratings.

“Without taking hasty or reckless actions, we should move forward toward the upcoming election while humbly keeping our head lowered and looking straight at citizens.”

Nakamura has been touring across Japan ahead of the upcoming Lower House election in the fall, taking younger politicians to meet with prospective political support groups close to the LDP while trying to remain under the radar.

When he does this, he shows up suddenly without an appointment, like in the famed period TV drama “Mito Komon,” where the main characters casually arrive at a scene and, while maintaining a low profile, quietly investigate before they make a move.

He used this same tactic during the Yokohama race.

The junior Lower House members accompanying him, Yoichiro Aoyagi and Kazuma Nakatani, were elected locally under the CDP banner.

He had not notified the organizations about their appearance beforehand.

Speaking to the two younger politicians, Nakamura said lawmakers “should have the groups’ management or chief talk with you in these cases.”

Aoyagi and Nakatani nodded deeply in appreciation for his “great advice.”

Nakamura handed a business card to a staff member of one organization they paid a surprise visit to, but the man quickly turned away, saying, "I am now responding to a phone call." Nakamura spoke with a man at the reception desk instead.

“If the tide changes in the Yokohama mayoral vote, that will have an impact on the general election,” Nakamura said about the scheduled Lower House election.

The visit seemed to have been a failure.

But Nakamura cracked a grin.

“They appeared to be highly alarmed,” he said. “The cold response came because they were alert. What is important is to show that the opposition force is zealously committing itself to the election.”

Nakamura was once a prominent LDP politician. But he was arrested in 1994 on suspicion of receiving a bribe for exertion of influence, and his sentence was finalized in 2003. This caused him to lose his seat as a Lower House lawmaker.

Despite the scandal, he has been winning elections since he ran as an independent in the 2005 Lower House race. The 14-term lawmaker was given a nickname: “The undefeated man.”

His political career, though, began with an uphill battle.

When Nakamura first ran in a Lower House election as a conservative independent in 1976, as many as four incumbent LDP lawmakers campaigned in his now-abolished, five-seat Ibaraki No. 3 constituency.

Local leaders had strong ties with each active lawmaker, but Nakamura pounded the pavement around the district to garner support, and he won the race with the most votes among the candidates.

When he left the LDP to compete as an independent, Nakamura chose the catchphrase “individuals over parties” as his slogan. He hopes other opposition politicians will also be able to obtain key skills and lay strong foundations to beat their rivals without depending on temporary political circumstances against the LDP.

Nakamura believes working toward that goal will help the opposition hold as many seats as the ruling coalition through Lower House elections.

Earlier this year, Nakamura organized tours and meetings for younger lawmakers in Tokyo as well as in Saitama, Kochi and Kagawa prefectures.

He campaigned in not only the Chiba and Shizuoka elections for governor, but also in the Yokohama mayoral race--on Suga’s home turf--with CDP lawmakers and Lower House election candidates.

In all those votes, opposition-backed candidates emerged victorious against their LDP-affiliated counterparts.

“One should not think they have nothing to do with other constituencies’ affairs,” said Nakamura. “They should rather actively campaign in other candidates’ constituencies. All elements are connected to one another.”

Nakamura’s style is gradually being adopted by opposition politicians.

Aoyagi turned up once again at the offices of organizations he visited before with Nakamura on Aug. 18, four days before the Yokohama mayoral vote. Aoyagi did not make any appointments.

Their staff showed him the door in previous visits. But Aoyagi explained to them that Yamanaka was leading the race. He was able to speak with senior officials from the organizations and suggested they hedge their bets.

“You bet on the LDP candidate by a 10:0 ratio,” Aoyagi said. “But Mr. Yamanaka will win, as Mr. Kishiro Nakamura asserted. I think it will be better for you to take sides with both candidates.”

After the tour, endorsement letters for Yamanaka came in from two organizations on the part of Hachiro Okonogi, 56, a former chief of the National Public Safety Commission, who is close to Suga.