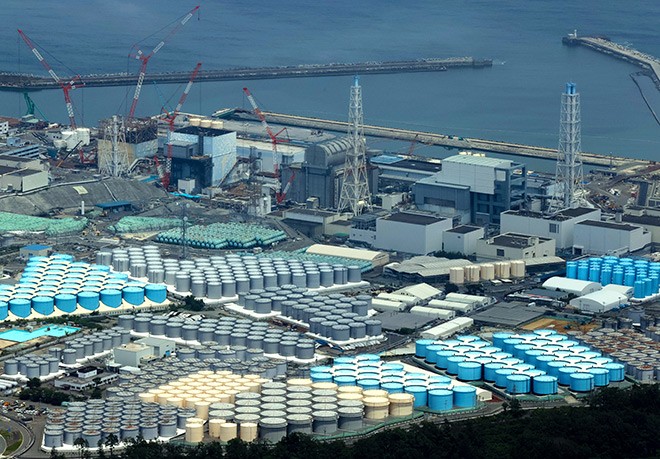 Tokyo Electric Power Co. announced it had abandoned plans to lay a pipeline on the seabed to discharge treated contaminated water 1 kilometer offshore from its crippled Fukushima No. 1 nuclear power plant and would build an undersea tunnel instead.

Executives of the utility told a news conference Aug. 25 that the tunnel would measure about 2.5 meters in diameter to minimize the impact of tides during the release of tons of water currently stored at the stricken plant, which is fast running out of capacity to hold more.

TEPCO has been confronting a continuous accumulation of contaminated water at the complex, reaching a rate of about 140 tons daily, following the triple meltdown triggered by the 2011 earthquake and tsunami disaster.

The utility also considered using existing equipment to release treated water near the coast, but abandoned that plan due to concerns the discharged water would circulate inside the equipment as its intake is located near a gate that was thought to be ideal for the purpose.

As a result, TEPCO opted for the offshore method since it is already in widespread use in Japan and overseas and helps to disperse released water more easily.

The company will mount a study of the seafloor as early as September with plans to start building a tunnel by the end of March 2022. TEPCO aims to complete the project by spring 2023, when it plans to start releasing the water. Project costs have not been announced.

The discharge site will be located outside the area where fishermen normally operate, the company said. The tunnel requires penetrating the bedrock about 12 meters below the surface of the sea, according to the utility.

“We have no idea how fast we can dig into the seafloor until we conduct a drilling survey into the bedrock,” said a TEPCO official.

Another official in charge of handling the problem of treated water said the utility will clarify the planned schedule to parties concerned and make changes to the plan if necessary.

The volume of radioactive water from the plant keeps building up. The water is kept in storage tanks after most of the highly radioactive material has been treated with equipment known as the Advanced Liquid Processing System (ALPS).

The government decided in April that releasing the treated water into the Pacific Ocean around two years later offered the most viable solution to the storage problem.

Prior to being released, the radioactive water will be treated additionally with the ALPS and mixed with seawater to dilute tritium, a radioactive isotope of the element hydrogen which the ALPS cannot remove, to well below statutory standards.

The treated water will be stored in a pit to measure the level of radioactive substances for two days or so before being released into the sea, according to a TEPCO official.

The utility on Aug. 25 also announced it would compensate local businesses and others affected by negative publicity that it fears is bound to arise.

TEPCO said it will publish more information about its plans, both inside and outside Japan, to curb detrimental rumors as much as possible.

As for determining damages, the company will use statistical data to compare the prices of agricultural, forestry and marine products and the volume of such trade after the discharge of the water with estimated figures calculated under a scenario of where the water is not released.

TEPCO also said it may also take into account a drop in sales of those products due to the COVID-19 pandemic after observing the nationwide trend.

The utility added that it will work out details of a framework for compensation after listening to the opinions of concerned parties.

However, TEPCO’s compensation policy failed to dispel deep-rooted concerns among fishermen and local residents who had expected the company to provide more details. It also remains unclear whether the utility will be able to gain their understating for the policy since it has not presented specific criteria for paying compensation.

TEPCO is supposed to compensate businesses whose products were affected by the 2011 Fukushima nuclear disaster, but it refused to do so in some cases, saying there is no causal relationship between them.

The utility also denied compensation to groups of victims who made claims in mediation through the government's Nuclear Damage Compensation Dispute Resolution Center, sowing distrust of the company among local governments and residents.

(This article was written by Yu Fujinami and Satoshi Shinden.)