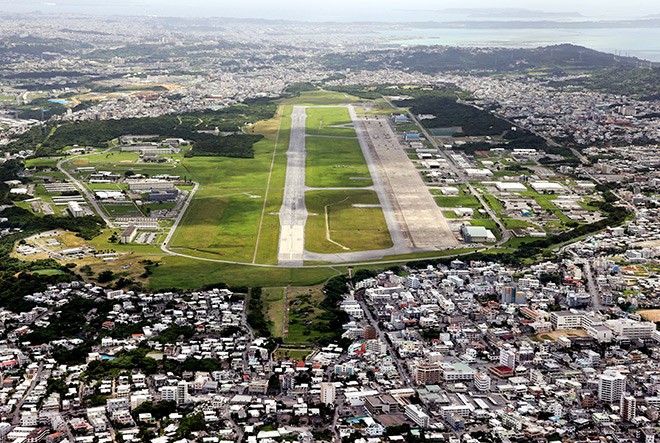 The U.S. Marine Corps Air Station Futenma, located in the heart of a residential area in Ginowan, Okinawa Prefecture, in July 2021 (Eiji Hori)

U.S. Marines based in Okinawa Prefecture dumped water contaminated with a potentially dangerous chemical into the local sewage system on Aug. 26, raising a stink among central, prefectural and municipal government officials.

The U.S. military did not help matters by informing their Japanese counterparts about the dumping less than an hour before proceeding with it. The incident occurred on the same day U.S. military officials were to discuss with Japanese officials about how to release the water.

“I feel strong outrage that the U.S. military unilaterally dumped the water even while they knew that discussions were proceeding between Japan and the United States on how to handle the contaminated water,” Okinawa Governor Denny Tamaki said at a hastily called news conference on Aug. 26.

“The unilateral release of the water is regrettable," a Foreign Ministry official handling the issue said. "We will lodge protests from all possible levels.”

A Defense Ministry official said, “It occurred so suddenly. I never thought they would do such a thing.”

According to Okinawa prefectural government officials, an email was received at 9:05 a.m. on Aug. 26 from the U.S. military saying that water treated at a processing plant on base would be released at around 9:30 a.m.

The Foreign Ministry in Tokyo received a similar message.

Okinawa prefectural officials were notified at 10:14 a.m. by the Okinawa Defense Bureau that the water had been released at about 9:30 a.m.

A local Okinawa newspaper reported in early July that the U.S. military had inquired with their Japanese counterparts about the possibility of releasing the water. Okinawa prefectural government officials asked the Okinawa Defense Bureau to confirm the report.

U.S. military officials explained to central and prefectural government officials that they had been commissioning a private-sector company to treat the water, but that the fiscal burden had become excessive. But U.S. military officials also said the released water would be treated to meet water quality levels for drinking water before being dumped into the sewage system.

Okinawa prefectural officials asked that no release of the water be conducted until the safety of doing so could be confirmed.

The Ginowan municipal assembly unanimously passed a resolution and opinion paper asking the U.S. military to handle the water in a responsible manner as in the past.

In its Aug. 26 announcement, the U.S. military said the water had been treated so that most of the pollutants were removed. Okinawa Defense Bureau officials told Okinawa prefectural government officials that about 64,000 liters of water had been released.

While the Environment Ministry and health ministry have water quality standards for the levels of PFOS in rivers and drinking water, there are no rules at the central or local government levels about releasing water containing PFOS into the sewage system.

That led to a meeting on July 19 at the Futenma air station among officials of the U.S. military as well as the central and prefectural government. The three parties collected samples of treated water that went through the processing plant on base and were scheduled to conduct separate analyses.

The meeting scheduled for Aug. 26 was intended to discuss how to release the results of the three studies.

According to the U.S. military announcement, the water released contained less than 2.7 nanograms of PFOS per liter of water.

Water quality standards limit the combined presence of PFOS and other substances to 50 nanograms per liter of water.

But Tamaki blasted the U.S. military announcement about the water quality level as not relevant because the water was released as discussions were to be held on whether the water could be safely treated.

A high-ranking prefectural official said without standards for the release of water no estimate could be made about the possible environmental impact. The official added there was a high possibility the water would flow into the ocean untreated as the prefectural government sewage processing facilities are not equipped to reduce the concentration of PFOS.

Ginowan Mayor Masanori Matsugawa touched upon the leaking of firefighting foam containing PFOS from the Futenma base into a nearby river in April 2020.

He issued a statement on Aug. 26 that said, “It is extremely regrettable because the release of the water lacked any consideration for local residents who still have not erased their concerns” from last year’s incident.

Matsugawa, through the Okinawa Defense Bureau, has asked the U.S. military to stop all future releases of such contaminated water.

(This article was written by Mika Kuniyoshi and Naoki Matsuyama.)