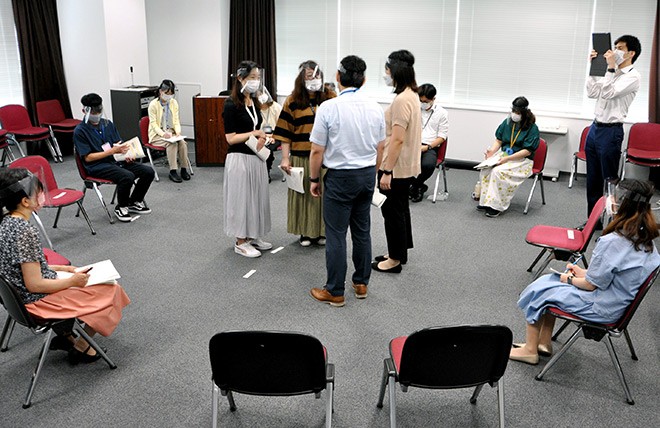 Tokyo ward government officials role-play a scenario in which parents attempt to conceal a case of child abuse in Tokyo in June. (Asahi Shimbun file photo)

Cases of child abuse in Japan rose to a record-high 205,029 in fiscal 2020, the health ministry announced on Aug. 27, the most since the ministry began keeping data on the subject in fiscal 1990.

The data was based on requests for consultations about abuse involving children under 18 at children's welfare centers nationwide during the period.

The number has increased every year since fiscal 1990.

In many cases, police officers who responded to an emergency call reported to a child consultation center that domestic violence between a husband and wife had occurred in front of a child.

Because of the COVID-19 pandemic, parents and children have spent more time together staying at home.

Some people have voiced concerns that the trend would lead to an increase in the number of child abuse cases.

A ministry official, however, concluded that the trend in the number of consultations was not connected to the infection situation.

In April 2020 when the nation was under a state of emergency for COVID-19, the number of consultations rose by 13 percent compared to the same month in 2019.

In June 2020, when the state of emergency had already been lifted, the number of consultations increased by 17 percent compared to the same month a year ago.