EDITORIAL: U.S. must delay Afghanistan exit, get many more people out 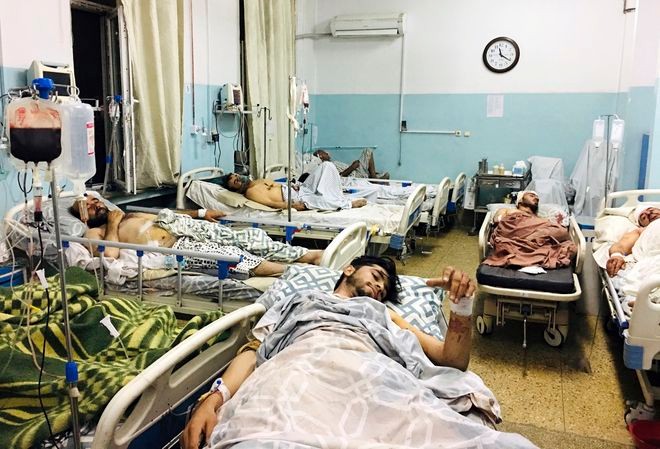 Afghans at a hospital in Kabul after the deadly terrorist attacks outside the international airport on Aug. 26 (AP Photo)

Suicide bombings and shootings at Kabul’s international airport this week killed scores of Afghans and 13 U.S. troops working to evacuate thousands of people desperate to flee the country after the Taliban takeover. This was an act of appalling brutality. Many more were injured in the attacks.

The Afghan affiliate of the militant Islamic State claimed responsibility for the outrage, which it said targeted the U.S. military and its collaborators.

The Afghan national army is no longer functioning while the Taliban, which is nominally in control of the nation, lack the means to maintain public security. We cannot help but feel enraged at this despicable act of terror committed in such a power vacuum.

At the same time, it should also be seen as a tragedy that symbolizes the limits of the effectiveness of the “war against terror” that the United States has been waging over the past 20 years.

The United States invaded Afghanistan soon after the Sept. 11 terror attacks on U.S. soil in 2001. U.S. forces swiftly drove out al-Qaeda, the terrorist group blamed for the Sept. 11 attacks, and toppled the Taliban regime, which had provided sanctuary for the terrorists.

Two years later, the United States mounted an invasion of Iraq in spite of broad international opposition. As the U.S.-led war against terror got bogged down, al-Qaeda revived and spawned the IS.

Washington declared war to defeat Muslim extremists, but it has only given birth to new extremist groups. U.S. forces are now rushing to leave Afghanistan, almost as if they are being chased out by groups hell-bent on attacking Americans. The U.S. debacle in Afghanistan has only sowed disappointment and more confusion.

It is estimated that between 8,000 and 10,000 foreign combatants recently entered Afghanistan, according to a report published by the United Nations in June. The number of terrorist attacks by IS has also increased sharply this year. These facts clearly demonstrate that the extremists had been plotting to regain their presence in anticipation of the withdrawal of U.S. forces.

Crushing terrorist organizations through armed force only treats the symptoms. Extremists can take root and become entrenched in any country as long as it is a “failed nation” without a legitimate and effective government. This is the main lesson the two decades of the war have offered. Afghanistan is on the brink of degenerating into failed nation status.

U.S. President Joe Biden denounced the terrorist attacks and pledged to retaliate against IS, saying, “We will hunt you down and make you pay.” But the burning challenge for the Biden administration brought to the fore by the attacks is to restore public security in Kabul and elsewhere in Afghanistan.

To do so, the Biden administration needs to scrap its Aug. 31 deadline for withdrawal. Hordes of people fearing for their lives under Taliban rule remain in the country. It is vital for the U.S. government to send a clear message of its commitment to ensure that all those seeking to escape from the Taliban can leave the country.

The attacks also underscored the need for Washington to accelerate talks with the Taliban. Aside from working on ways to build a new regime, it is urgent to secure the safety of citizens.

If the Taliban really wants to achieve reconciliation among the Afghan people and gain recognition from the international community, it must take convincing acts that demonstrate its commitment to severing all ties with terrorist groups and protecting citizens. No more bloodshed in Afghanistan should be allowed.