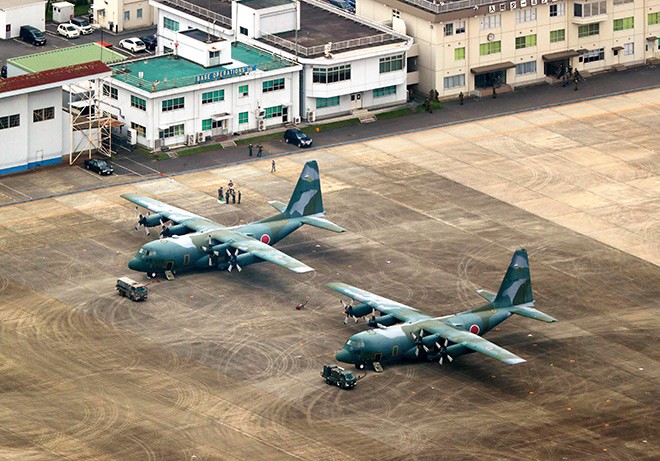 Hampered by legal provisions and hazardous conditions on the ground, the Air Self-Defense Force managed to rescue only a single Japanese national from Kabul airport, instead of the more than 500 individuals anticipated, on Aug. 27.

However, the ASDF was able to get 14 Afghan government officials out of the country the day before at the request of the United States, according to several government sources.

They said the Afghans were members of the ousted government and would have faced persecution from the Taliban if they remained in Afghanistan.

The 14, the first foreign nationals evacuated by the ASDF from Afghanistan, were flown to Pakistan.

The ASDF, acting on the assumption it would be evacuating around 500 Japanese nationals as well as local Afghans working for the Japanese Embassy and the Japan International Cooperation Agency, dispatched three transport aircraft for the mission.

A government source said that only a lone Japanese national was airlifted from Kabul to Islamabad on Aug. 27.

The Kyodo News website identified the lucky Japanese as Hiromi Yasui, 57, who runs a business in Kabul and also strings for the Kyodo News Kabul bureau.

Reporters were briefed late Aug. 27 by the Foreign and Defense ministries on the rescue operation, but officials withheld key details, such as how many people were evacuated, the organizations they worked for and how those seeking to be evacuated reached Kabul airport amid continuing turmoil there.

Officials also refused to divulge the number of those still in Afghanistan seeking evacuation or the state of their health, on grounds the rescue mission was continuing. They said every effort would be made to gain the cooperation of the United States and other nations for assistance in evacuating those desperate to leave Afghanistan.

Many of those trying to flee were apparently unable to reach the airport because of checkpoints set up by armed Taliban militia.

There were calls within the ruling Liberal Democratic Party to move out from Kabul airport to locate those wanting to leave and deliver them to the airport. But government officials never considered that option because the SDF Law decrees that an evacuation effort can only proceed if the safety of SDF members was ensured. And this was not the case.

Defense Minister Nobuo Kishi said Aug. 27 that security at Kabul airport had been secured by U.S. forces. But the situation outside the airport was another matter. Suicide bombings in the vicinity of the facility the day before left scores dead and injured.

Aug. 27 was the last window for SDF transport planes based on landing times at Kabul airport provided by the U.S. military, so the rescue mission effectively ended the same day.

On Aug. 17, a British military plane evacuated 12 Japanese embassy staff, but many local Afghans were left behind, leading to the decision to dispatch three SDF transports to Pakistan.