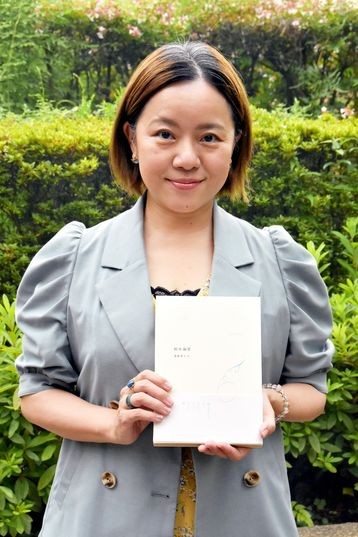 "Butterfly," a collection of verse by acclaimed poet Mari Kashiwagi published in Japan last year, continues to capture the imagination and empathy of poets around the world.

A number of her poems from that collection were recited in six languages during an online reading event held in June as part of the Princeton Festival in the United States.

"Poetry has the power to transcend divisions," said Kashiwagi, who was born in Germany but raised in Japan.

Kashiwagi studied at Tokyo's Keio University Graduate School of Letters. She won the prestigious Gendaishi Techo magazine's poetry award in 1995. Kashiwagi finds inspiration in trees and flowers to explore the meaning of life through her works.

She has written more than 2,000 poems themed on butterflies since she developed a fascination for the insects 15 or so years ago.

From among her numerous poems, she made careful choices for the "Butterfly" project that was published by Shichosha Co. in September 2020. Her friend Takako Rento translated her verse into English so her poems run in two languages.

When she recited selections from "Butterfly" both in Japanese and English at online reading events along with fellow poets around the world, she won rave applause for portraying beautiful but ephemeral scenes associated with butterflies.

In June, "Butterfly" was featured in a relay reading session during the Princeton Festival, which had been held since 2005 but was partially held online this year, due to the novel coronavirus pandemic. Kashiwagi and five other poets joined the event.

Each poet recited a verse from "Butterfly" in their native language and in English.

The other poets followed suit, referring to butterflies as "farfalla" (Italian), "mariposa" (Spanish) and "babochka " (Russian).

"I felt as if butterflies changed their shapes and danced in different places" even though the reading session was held online, Kashiwagi recalled.

She attends online reading events with other poets from outside Japan to recite verses from "Butterfly" on a continual basis.

Although poets rarely come under the spotlight in Japan, Kashiwagi said she wants "people to know that poets have tried to overcome divisions through words" even amid this latest global health crisis.