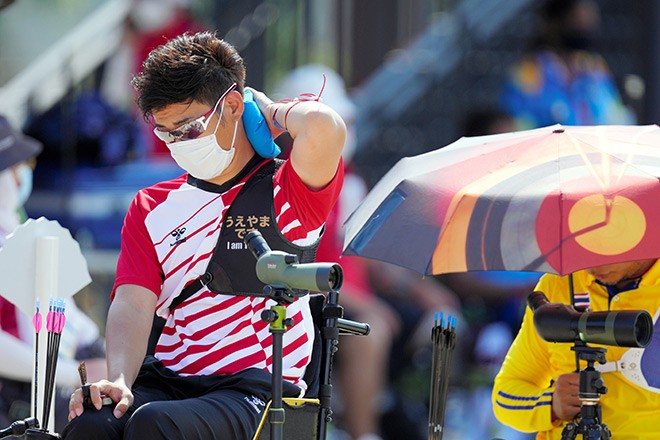 Tomohiro Ueyama tries to cool off during the archery competition at the Tokyo Paralympics on Aug. 27. (Hiroki Endo)

Athletes competing in the Tokyo Paralympics are having a hard time coping in the withering heat of recent days, but so far, no major health issues have emerged.

Still, organizers are taking no chances as some athletes, notably those recovering from spinal cord injuries, have a harder time than most controlling their body temperature.

Temperatures in the capital were well above 30 degrees on Aug. 27 when archery competition was held at the Yumenoshima Park Archery Field.

Each competitor fired off 72 shots over the course of about two hours. Many took breaks under parasols and tried to keep cool by pouring water over their heads.

Aiko Okazaki, 35, wore a vest under her uniform that contained frozen gel. During her breaks, she applied an ice pack to her neck and sprayed cool water on her face and body.

She is paralyzed from the neck down after breaking a cervical vertebra during a 2005 derailment disaster on the JR Takarazuka Line that claimed 107 lives and left hundreds injured.

Okazaki said the only way to control her body temperature is to cool her body externally or drink liquids.

Although she had thought up various ways since last summer to deal with the brutal temperatures she knew would come, Okazaki admitted after the competition that the intense heat had taken a toll.

Wheelchair tennis competition on the outdoor courts at Ariake Tennis Park was moved back from an 11 a.m. start to after 5 p.m. when the temperature is cooler.

Wheelchair tennis players are closer to the court, so the heat reflected off the surface affects them more.

High temperatures in Tokyo have exceeded 30 degrees every day since Aug. 18, according to the Japan Meteorological Agency. On Aug. 27, the mercury reached 34.3 degrees and was forecast to hit 35 degrees on Aug. 28.

Kanehiro Fujiyoshi, a doctor at Murayama Medical Center in Musashimurayama, western Tokyo, who heads the research section for treating spinal cord injuries explained that autonomous nerves in people with disabilities do not function properly in high heat, making it more difficult for the person’s body to perspire or expand blood vessels to bring down body temperature.

Competing in the Paralympics would add even greater pressure on the athletes, coupled with the excitement of wanting to excel, he said, adding that some athletes may not realize that their body temperature is approaching dangerous levels.

"There are probably many foreign athletes who have never experienced such heat,” Fujiyoshi said. “Everyone should be aware that this is a world totally removed from the ordinary one.”

He called for measures to be implemented quickly to deal with any sudden physical change on the part of the athletes.

The Paralympic organizing committee has been encouraging athletes to take frequent breaks and consume liquids. Ice baths and mist fans have been installed at various venues.

Hidemasa Nakamura, who helps supervise all aspects of the Games so they go off smoothly, said information was being shared with national Paralympic committees and sporting organizations to determine health priorities for athletes in various disciplines.