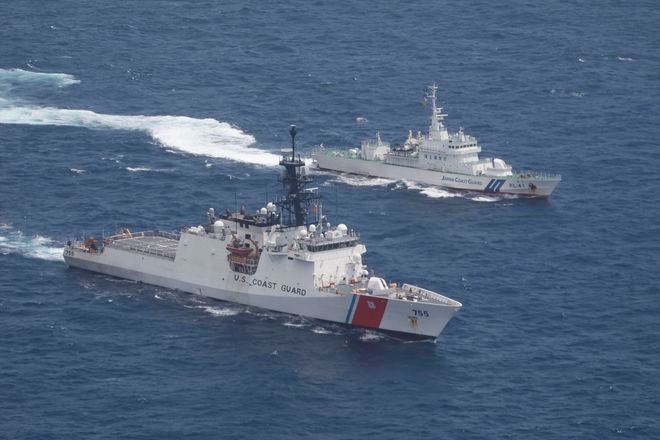 In this photo provided by U.S. Coast Guard, Coast Guard cutter Munro, bottom, and Japan Coat Guard patrol vessel Aso transit together in formation during a maritime engagement in the East China Sea on Aug. 25. (U.S. Coast Guard via AP)

BEIJING--China's defense ministry protested Saturday the passage of a U.S. Navy warship and Coast Guard cutter through the waters between China and Taiwan, a self-governing island claimed by China.

A statement posted on the ministry's website called the move provocative and said it shows that the United States is the biggest threat to peace and stability and creator of security risks in the 160-kilometer (100-mile) wide Taiwan Strait.

“We express firm opposition and strong condemnation,” the statement said.

The USS Kidd guided-missile destroyer and Coast Guard cutter Munro sailed through the strait Friday in international waters, the U.S. Navy said. Such exercises are seen as a warning to China, which recently conducted drills near Taiwan and has not renounced the use of force if needed to bring the island under its control.

“The ships’ lawful transit through the Taiwan Strait demonstrates the U.S. commitment to a free and open Indo-Pacific,” a statement from the Navy's Japan-based 7th Fleet said.

Taiwan, home to 23.6 million people, split from China during a civil war that led to the Communist Party taking control of the mainland in 1949. The U.S. does not have formal diplomatic relations with Taiwan but maintains a representative office in the capital, Taipei, and is its biggest supplier of military equipment for its defense.

The U.S. Coast Guard has been stepping up its presence in Asia, as the Chinese coast guard patrols near disputed islands that both China and other governments claim in the South and East China Seas.

The 418-foot (127-meter) long Munro, which is based in Alameda, California, arrived in the region in mid-August for what the U.S. Coast Guard said would be a months-long deployment. It trained with a Japanese coast guard ship, the Aso, in the East China Sea for two days earlier this week.

The U.S. and Taiwan coast guards held talks this month after the two signed a cooperation agreement in March. China has denounced the agreement.

Saturday's defense ministry statement said that “Taiwan is an inalienable part of China,” and that China would not tolerate any interference in what it called its internal affairs.