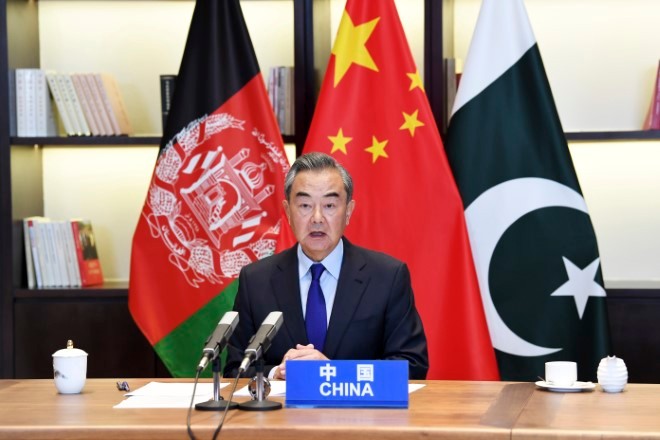 Washington should work with the international community to provide economic and humanitarian aid to Afghanistan, help the new regime run governmental functions normally, maintain social stability, and stop the currency from depreciating and the cost of living from rising, Wang said, according to a statement.

"While respecting the sovereignty of Afghanistan, the U.S. should take concrete action to help Afghanistan fight terrorism and stop violence, rather than playing double standards or fighting terrorism selectively," Wang said, warning that the "hasty withdrawal" could allow terrorist groups to "regroup and come back stronger."

Chinese state TV said the call was made at the invitation of Washington.

State Department spokesperson Ned Price said in a statement that Blinken and Wang spoke about "the importance of the international community holding the Taliban accountable for the public commitments they have made regarding the safe passage and freedom to travel for Afghans and foreign nationals."

Before the chaos of the past two weeks, U.S. officials had argued that withdrawing from Afghanistan would free up time and attention of senior U.S. political and military leaders, as well as some military assets, to focus on the Indo-Pacific and the challenge posed by China, which the Biden administration has declared its foreign policy priority.

But China's state-controlled media have seized on the often chaotic pullout, portraying U.S. support for allies as fickle.

China has not officially recognized the Taliban as Afghanistan's new rulers, but Wang Yi last month hosted Mullah Baradar, chief of the group's political office, and has said the world should guide and support the country as it transitions to a new government instead of putting more pressure on it.

Wang earlier told Blinken in a call on Aug. 16 that the hasty pullout of U.S. troops from Afghanistan had a "serious negative impact," but pledged to work with Washington to promote stability in the country.

But Wang said Washington could not expect China's cooperation if it was also trying to "contain and suppress China and harm China's legitimate rights and interests," Chinese state media reported at the time of the earlier call.

The engagement comes as relations between Beijing and Washington are at their lowest point in decades and just after the release of a U.S. intelligence assessment into the origins of COVID-19 that China said "wrongly" claimed that Beijing was hindering the investigation and dismissed as "not scientifically credible."

The two diplomats also discussed U.S.-China ties on Sunday, according to the Chinese statement.

Wang said recent communications between the two countries on Afghanistan and climate change show that dialogue and cooperation are better than confrontation, it said.

"China will consider how to engage with the U.S. side based on the U.S. attitude towards China," Wang was quoted as saying.