VOX POPULI: When will the Afghanistan that Hirayama painted return? 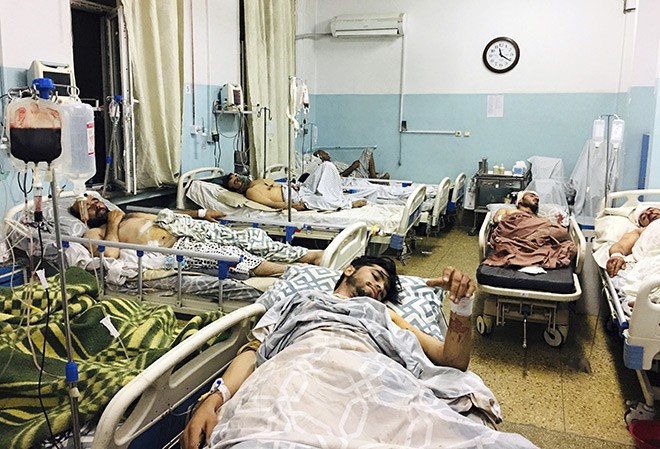 Afghans lie on beds at a hospital after they were wounded in a deadly attack outside the airport in Kabul on Aug. 26. (AP Photo)

He traveled there to see huge images of Buddha carved into a rock face, but he was drawn to the face of a bakery owner in a bazaar he dropped by.

Using gestures, the artist asked the man to model for him.

When he would start to paint, a large crowd would immediately gather.

A scene of commotion prompted a police officer to direct traffic, Hirayama recalled in “Nishi kara Higashi ni Kakete” (From West to East), a collection of his essays accompanied by his own paintings.

A traveler from Japan, let alone one who painted in a local market, must have been rare in the country.

The episode conjures up an image of the din of a peaceful marketplace where no one has to worry about falling into harm’s way.

Today, danger could be lurking wherever people gather in Afghanistan.

A terrorist attack targeted the international airport in Kabul, thronged with people trying to flee the country. More than 180 people were killed in the suicide bombing on Aug. 26.

“I looked around after the explosion and found dozens of bodies lying over one another. My younger brother was among them,” a man was quoted as saying in an Asahi Shimbun report.

Evacuating foreign nationals is a formidable challenge if even the airport is not safe.

The Taliban, who have their own history of carrying out terrorist attacks, now have almost the entire country under their control. They are persistently hunting down people who worked for the now-collapsed government.

Even so, the job of maintaining public security is left to them, at least for the time being.

This is a sad reality created by the ill-planned withdrawal of U.S. forces.

Hirayama visited Afghanistan in 2002 after the country had suffered from a Soviet invasion, civil war and U.S. air raids.

A child with an expressionless face caught his attention.

“Since birth, this child has probably never known peace,” the artist wrote in one of his books.

Future generations should not remain trapped in such misery.