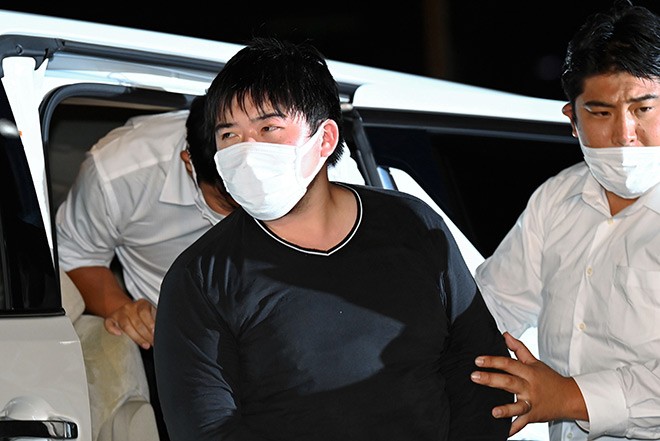 The college student arrested over an acid attack in Tokyo has not entered a plea, investigative sources said.

But he did speak about his history with the victim during police questioning and said that he had “troubles” with him in their past school days.

Hirotaka Hanamori, 25, a resident in Shizuoka city, is accused of throwing sulfuric acid at a male company employee, 22, at the Shirokane-Takanawa subway station in Tokyo’s Minato Ward around 9 p.m. on Aug. 24.

Police sent the case to prosecutors on the morning of Aug. 30.

Hanamori allegedly threw the acid on the man near the escalator that leads above ground from the station's exit gate. The victim suffered severe burns to his face, shoulder and neck, as well as cornea damage in both eyes.

Hanamori and the victim had attended the University of the Ryukyus together in Okinawa Prefecture and were part of the same extracurricular club. The suspect was one year ahead of the victim at the university.

Hanamori spoke about the victim during questioning, sources recounted.

“I had troubles with him in our past school days,” he said.

Meanwhile, the victim told police about Hanamori, “When I called him a few years ago, ‘Hey, Hanamori,’ without using the honorific title, he scolded me that I should call him Hanamori-san.”

It is not clear whether this was related to the attack.

Police said they are investigating carefully into the situation and the personal history between the two men.

The pair had met in Tokyo in late July, investigative sources said.

When the victim was walking down the road in Tokyo’s Roppongi district on the way home from his office, Hanamori appeared. They took the same train to Shirokane-Takanawa Station together and conversed in a nearby park.

Based on security camera footage and other evidence, it is highly likely that Hanamori came to Tokyo from Shizuoka city on Aug. 24 and started stalking the victim near his office, sources said. It is also likely that he went home after the attack and traveled to Okinawa Prefecture on Aug. 25, the following day.

In Okinawa Prefecture, he spent several nights at an acquaintance’s house. Prefectural police found him on a road within the jurisdiction of the Ginowan Police Station on Aug. 28.