Citizens battle Kudo-kai yakuza gang to take back their streets 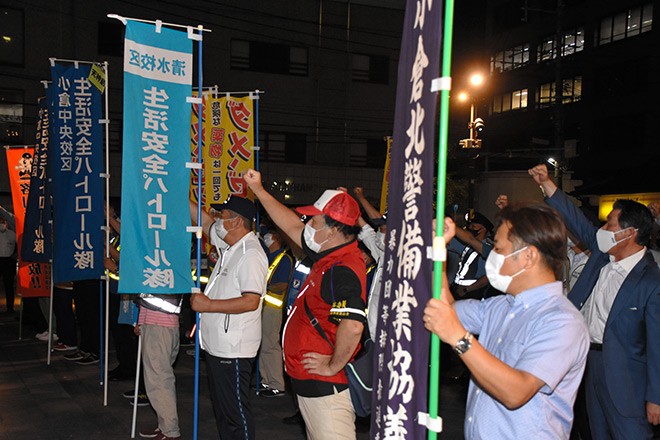 KITA-KYUSHU--It sounds like a cliched movie plot, citizens living in fear of a yakuza gang and banding together with law enforcement to drive out gangsters and restore normalcy.

But that's the real-life mission of a man in this southwestern port city that has long been the home turf for Kudo-kai, arguably Japan’s most violent yakuza organization.

“I felt we the citizens had to stand up and do something for the community that was darkening,” the man recalled.

The man has been actively involved in a movement to drive gangs out of business in Kita-Kyushu.

He started patrolling the neighborhood with people in the restaurant industry after the 2003 infamous bombing of a nightlife club named Boorudo in the city's Kokura-Kita Ward.

Twelve people, including club workers, sustained minor and serious injuries when a member of a gang related to Kudo-kai rolled a hand grenade into the establishment.

The owner of the club had been a leader of an anti-gang campaign.

To the man who grew up in Kita-Kyushu, yakuza were never distant fictional characters. Gangsters have always been around, but they never gave him any cause for concern, he said.

But the bombing and subsequent incidents where non-gang members and ordinary citizens were targeted, including the shooting and killing of a construction company executive, completely changed the man’s perspective.

He saw the city streets losing their liveliness and residents talking in hushed voices in fear of someone eavesdropping on their conversation.

So, citizens started to fight back, with the support of law enforcement.

Such efforts appear to have culminated in the 2014 arrest of Kudo-kai’s don, Satoru Nomura, and the unprecedented death sentence handed down to him at the Fukuoka District Court on Aug. 24.

“I felt relieved to learn that (Nomura) received the punishment demanded by the prosecution,” the man said. “But that doesn’t mean the (Kudo-kai) no longer exists. I cannot become complacent.”

Nowadays, it is rare for members of Kudo-kai to be spotted walking or driving down the streets of Kita-Kyushu.

But the man feels that it is too early to let his guard down.

“I am determined to continue the activities to make the city tainted with an image of a gang to become a safe place,” he said.

Kita-Kyushu, the second-largest city in Fukuoka Prefecture, has prospered under industrial expansion.

Neon-lit nightlife districts near Kokura Station have attracted young people, drunken salarymen and women in fancy dresses and kimono who work in the restaurant industry.

For Kudo-kai, the city and its surrounding areas have served as a ripe revenue source for its activities.

The gang members have siphoned huge sums of “protection” money from construction businesses as well as restaurants and bars.

To patrol and maintain its turf, Kudo-kai members cruised the streets at night in cars with dark-tinted windows.

“I don’t see yakuza on the streets. It doesn’t happen anymore,” the manager said. “Now, simply by virtue of being associated with yakuza, you would be seen as an antisocial force and lose credibility. You can’t hang out with them.”

The membership of Kudo-kai peaked in 2008, with 1,210 regular and associate members in Fukuoka Prefecture, according to the prefectural police.

Citizens who wished to cut ties with the gang and refused to pay the protection money, particularly those in the construction industry and restaurant and bar businesses, were attacked and sometimes killed.

In 2010, an ordinance to drive out organized crime syndicates was established in the prefecture.

Under the ordinance, certain businesses vulnerable to gangs’ threats and involvement--such as bars, “sunakku” drinking establishments and pachinko parlors--were encouraged to display a sign declaring the business “off limits to gangs.”

The system was launched in August 2012, targeting four areas in the prefecture, including Fukuoka and Kita-Kyushu.

A gang member who ignored the sign and entered such a business was subject to a restraining order or a fine.

However, retaliation and pressure from gangs were quick and clear.

In Kita-Kyushu, people related to businesses displaying the sign were stabbed in succession.

The percentage of businesses displaying the sign long remained relatively low--somewhere between 50 and 59 percent.

But starting from September 2014, police launched a massive operation to destroy Kudo-kai and arrested Nomura and other senior members, as well as hundreds of people who had ties with the gang.

Police believe the campaign has been effective as the number of Kudo-kai’s regular and associate members dwindled to 430 as of the end of 2020.

More businesses have become willing to display the anti-gang sign. The rate has gradually risen lately, and it rose to 70.7 percent as of the end of 2019. It increased further to 72.9 percent in 2020.

“(Residents) rarely see gang members on the streets, and the number of (gang-related) incidents decreased. That might have reduced their fears,” a prefectural police representative said.

But the changes wouldn't have come without the ultimate sacrifices and exceptional courage of ordinary citizens.

For a woman who now manages a sunakku bar in the city’s Kokura district, her life changed on Aug. 18, 2003.

She was welcoming customers at Boorudo as usual. Suddenly, a man dressed in black and wearing a helmet opened the door and stormed into the establishment.

The man was screaming and tossed an object that appeared to be a black bin. It hit her head and fell to the floor.

She remembers seeing a flash of lights, then a roaring sound.

Flower bases were knocked to the ground, and a sofa was overturned. Paintings on the walls were smashed and a toilet bowl was shattered into pieces.

“It’s hot!” her coworker groaned. She tried to soothe her wounds with a wet hand towel, which became blood-soaked.

The man was overpowered by people outside the club and later died of chest compression.

The incident shook many residents to the core.

The woman struggled with having flashbacks to the bombing many times for a long time.

She was scared every time a package was delivered to her home, suspecting it contained an explosive. Even any noise she herself made frightened her and took her breath away.

The bombing was also a game-changer for police.

Prefectural police launched a monthly patrol, scheduled around the 18th of every month, to mark the horrific event.

Residents who felt that enough was enough joined the officers and started patrolling the nightlife districts.

Their bravery inspired the woman.

“Everybody was fighting terror. They had the courage to take action,” she recalled.

“As a survivor (of the bombing), I need to do something,” she thought.

A few years later, she donned a hat and glasses and participated in the patrol for the first time.

But Kudo-kai did not back off.

After the anti-gang sign system was launched in summer 2012, a spate of violent incidents occurred in which female sunakku owners became a target and were stabbed on the streets at night. Perpetrators in these cases were members of gangs related to Kudo-kai.

A building that housed a sunakku bar where she worked at the time was set on fire. The bar was displaying the sign.

Things started changing slowly but surely, particularly after the arrest of Nomura and other senior members.

There has not been a report of any shootings in Kita-Kyushu since then. Joint patrols by police and residents have been held almost every month.

The atmosphere in the city has changed in the past few years for the better and it feels safer, the woman said.

The woman decided to put up the anti-gang sign at her sunakku bar.

“Keeping close tabs on (the gang) under all our watchful eyes will likely serve as a deterrent,” she said.

“Yakuza said they are the ones who protect the city. But they did nothing but instill fear in us,” she said. “We need to protect our city by ourselves. There is no doubt about that.”

(This article was compiled from reports by Hayato Kaji and Daichi Itakura.)