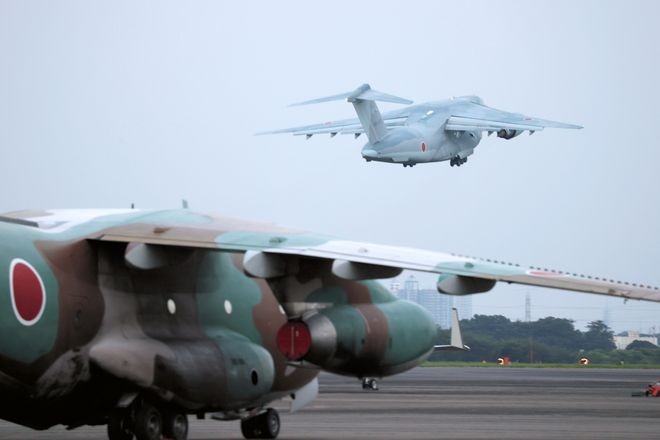 A C-2 transport aircraft departs for Afghanistan from the Air Self-Defense Force’s Iruma Air Base in Saitama Prefecture on Aug. 23. (The Asahi Shimbun)

The Japanese government is obliged to take all means possible to evacuate Japanese nationals and local staff of Japan’s public organizations from Afghanistan following the Taliban takeover that put their lives at risk.

In the event, the Air Self-Defense Force mission to evacuate these people had to be aborted, leaving behind a large number of Afghans who worked for Japan. The government must reflect deeply on the regrettable decision to wind up the ASDF mission before it was completed.

It needs to confront a host of difficult questions about the failure. Did the decision to deploy ASDF aircraft come too late? Were there other means to help transport the people to the airport?

The government must undertake a rigorous review of the decision-making process and its failure to achieve its goals if it is to learn from its mistakes. At the same time, it should continue making all possible efforts to secure the safety of those left behind and act swiftly to evacuate them. This will probably require working with the international community to make a deal with the Taliban.

The government dispatched three ASDF transport aircraft, a government plane and 300 or so SDF personnel for the mission. The aircraft were supposed to fly these people from the international airport in Kabul, the Afghan capital, to Islamabad, the capital of neighboring Pakistan.

But the ASDF managed to evacuate only 15 people in total. It rescued a single Japanese national as well as 14 Afghan officials of the ousted government the day before at the request of the United States.

Around 500 Afghans working for the Japanese Embassy in Kabul and a local office of the Japan International Cooperation Agency (JICA) were trying to get out but unable to due to the Taliban’s tight control over access to Kabul international airport. A devastating terrorist bomb attack close to the airport that killed more than 170 Afghans and U.S. soldiers also hindered the rescue operations.

The government decided Aug. 23 to deploy ASDF aircraft for the mission, eight days after the Afghan government collapsed. The ASDF managed to carry out effective operations for only two days due to the Aug. 31 deadline for the withdrawal of U.S. forces and the deteriorating local security situation. Was there no way for the government to reach a decision earlier, even though it first had to confirm that the airlift could be carried out safely?

Initially, the government planed to use civilian aircraft to evacuate local Afghan staffers. But it switched to using ASDF aircraft after civilian flights were stopped.

The government cannot escape criticism for its delayed political decision.

Some countries successfully ferried Afghan citizens to the airport amid the upheaval. Tokyo should meticulously analyze these successful cases to glean lessons.

Two days after the Afghan regime toppled, all 12 members of the Japanese staff of the embassy, who are responsible for protecting Japanese nationals in the country, were evacuated by a British military plane. The appropriateness of this decision should also be called into question.

A small number of Japanese citizens still remain in Afghanistan. How much thought was given to the safety of the local Afghan staffers?

At the time, Foreign Minister Toshimitsu Motegi was on a Middle East tour, while the Japanese ambassador, Takashi Okada, was out of the country. These are issues that also need to be examined to assess whether they affected the government’s decisions.

The government has so far refused to disclose information concerning the failed mission under the pretext that doing so could hamper related activities.

It should understand that it cannot learn meaningful lessons from the debacle unless it discloses all relevant information, including inconvenient facts.