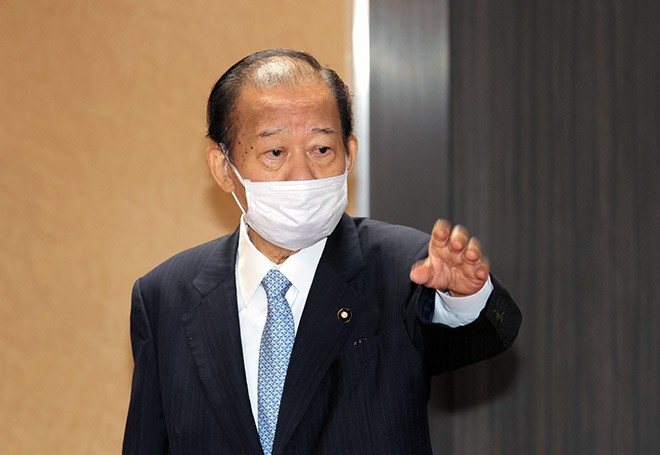 Prime Minister Yoshihide Suga will move to freshen up the image of the ruling Liberal Democratic Party and improve his own chances in the party presidential election next month by replacing a powerful party executive in early September.

Toshihiro Nikai, the LDP secretary-general, will get the boot prior to the Sept. 17 start of official campaigning for the LDP leadership race, according to several high-ranking administration sources close to Suga, who is 72.

Suga and Nikai were scheduled to meet Aug. 31 to discuss the move. Sources said Nikai has not raised objections to stepping down.

Demonstrating the politically sensitive nature of the move, Cabinet ministers on Aug. 31 declined to comment when pressed for comment on reports that Nikai would be replaced.

Ryota Takeda, the internal affairs minister who belongs to the faction headed by Nikai, interrupted a question about Nikai and said at his news conference, “I will not comment on party matters.”

Nikai, 82, has served as party secretary-general for more than five years, the longest tenure on record. The concentration of power for such a long period led to disquiet in the party, especially among younger lawmakers who feel the octogenarian was the wrong face to represent the party.

Fumio Kishida, a former foreign minister and LDP policy chief who has announced his intention to run against Suga in the election, had already signaled he would dump Nikai if he wins.

Suga is also leaning toward setting a date for the Lower House election through Cabinet approval rather than use his prerogative to dissolve that chamber, sources said.

The term of Lower House members ends on Oct. 21. Under the Public Offices Election Law, an election must be held within 30 days of the end of the term.

Under that scenario, the Lower House election will likely be held on Oct. 17, the last Sunday before the term of members expires.

The LDP presidential election will be held on Sept. 29.

The opposition parties had asked the government and ruling coalition to convene an extraordinary Diet session before Sept. 17 in part to pass a supplementary budget to increase the reserve fund to deal with the novel coronavirus pandemic.

But Chief Cabinet Secretary Katsunobu Kato met with Hiroshi Moriyama, the chairman of the LDP’s Diet Affairs Committee, and they confirmed Aug. 30 that the reserve fund was sufficiently topped up and there was no need to accede to the opposition’s request.

If an extraordinary Diet session is not convened, there would be no way for Suga to dissolve the Lower House and call a snap election.

(This article was written by Kazuki Uechi, Takashi Narazaki and Asako Myoraku.)