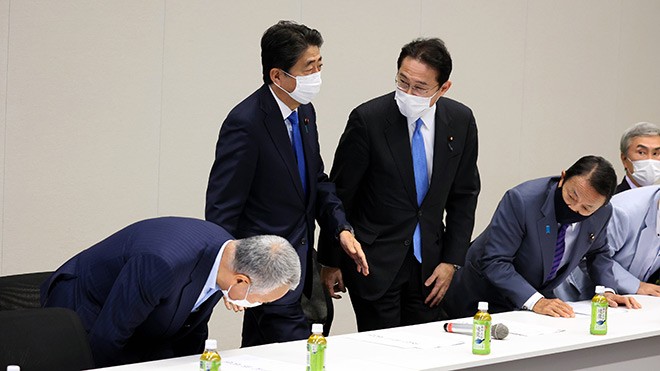 Former Prime Minister Shinzo Abe’s days in the political wilderness appear to be over as lawmakers gearing up to run in next month’s Liberal Democratic Party presidential election jostle to get on the good side of him.

Little has been heard of Abe since he quit the post last year, citing health reasons, after nearly eight years in power. He was succeeded by Yoshihide Suga last September.

Abe on Aug. 30 met with Fumio Kishida, a former foreign minister and LDP policy chief who has already announced his intention to run in the election to be held Sept. 29.

According to sources, Abe praised Kishida for the way he handled a news conference Aug. 26 to announce he was formally throwing his hat in the ring.

When Kishida ran in last year’s LDP presidential election he sought out Abe’s support, in part because he served as foreign minister and LDP policy chief under Abe. But Abe decided to back Suga, a staunch ally who faithfully served him as chief Cabinet secretary.

Gaining Abe’s support is considered crucial because he is still influential in not only the largest LDP faction headed by former Chief Cabinet Secretary Hiroyuki Hosoda to which he belongs, but also the second largest faction headed by Finance Minister Taro Aso, another longtime Abe ally.

Kishida has recently made statements more in line with positions taken by Abe with regard to issues like whether married couples should be allowed to use separate surnames and that old chestnut, constitutional revision.

Sanae Takaichi, the former internal affairs minister who has shown interest in running in the LDP presidential race, has also been in close phone contact with Abe in recent weeks.

Speaking with reporters on Aug. 26, Takaichi said she wanted to run because of unfinished business from the time Abe was prime minister. She has dubbed her own package of economic measures “New Abenomics” in a bid to demonstrate she would carry on what Abe started.

While Takaichi does not belong to any LDP faction, she is a major player among conservative elements and has long been considered close to Abe. She hopes to use those ties to conservative lawmakers to gather the 20 signatures needed to formally run in the party presidential race.

At the same time, Abe keeps insisting he still backs Suga in the party leadership race, due to the support he provided as chief Cabinet secretary when Abe was prime minister.

But some Suga associates are now griping that Abe is not doing enough to discourage Kishida and Takaichi from running.

Hakubun Shimomura, the current LDP policy chief, told reporters Aug. 30 that he would not run in the party presidential election, but concentrate on compiling additional economic measures ordered by Suga.

(This article was written by Tsuneo Sasai, Ryuichi Yamashita and Natsuki Okamura.)