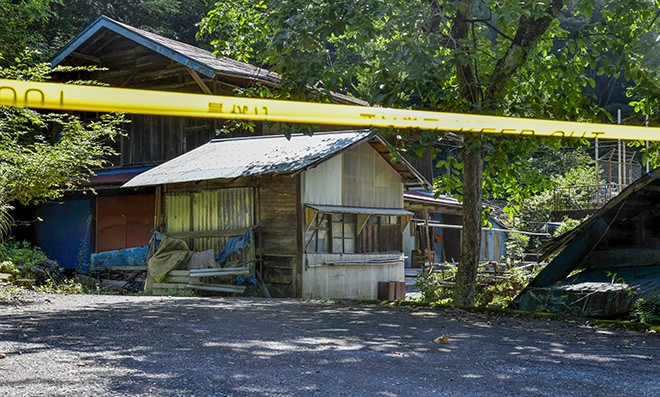 A Tokyo high school girl who went missing Aug. 28 was found dead on a remote property in central Japan with stab wounds to her back, police in the capital said Aug. 31. There were indications she had been strangled with a rope.

Police took the unusual step of calling a news conference in the small hours of the morning to announce developments in the case.

Later that day, police arrested a couple on suspicion of abandonment of her body. They were identified as Shohei Komori, 27, and his wife Izumi, 28, both residents of Shibukawa, Gunma Prefecture.

They admitted to abandoning the girl's body.

The police ordered an autopsy to determine the cause of death.

Kana Washino, an 18-year-old senior at private high school and resident of Tokyo’s Sumida Ward, went missing from the early evening of Aug. 28.

An investigative official said it was almost certain that Washino was acquainted with at least one of the couple.

According to the police, she told her family that she was off to meet a friend and would return home soon. She left around 3:30 p.m. on Aug. 28 and had not been seen since.

When she was still not back 6:30 p.m., her worried family contacted the police.

Police who checked nearby security cameras confirmed that Washino got into a passenger car on a road near her home.

The police located the vehicle in Nagano Prefecture around 7:20 p.m. on Aug. 30. When they questioned the couple in the car about Washino, they dropped hints that they murdered the girl and also revealed that they dumped her body in Yamanashi Prefecture.