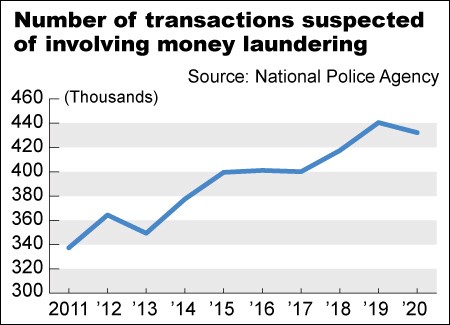 A global watchdog warns that Japan needs to do more to combat money laundering, such as having financial institutions confirm the identities of customers using their bank accounts and having authorities crack down on concealing proceeds from crimes.

The Financial Action Task Force (FATF) on Aug. 30 released a report on the results of its fourth evaluation of Japan’s measures against money laundering since 2008.

The FATF’s latest report categorized Japan as being in the "enhanced follow-up" group, along with the United States and China, of countries that need to improve anti-money laundering measures in various areas.

The rank is the second lowest level under the FATF’s three-stage classification.

To conceal the origin of cash obtained by means such as drug trafficking and fraud, criminal organizations and terrorists engage in money laundering, transferring the illicit earnings into a fictitious bank account and then another, thus avoiding detection or arrest by investigative authorities.

The FATF comprises 39 member countries and territories, including the Group of Seven nations, and issues recommendations on measures against money laundering and terrorist financing, such as drafting or revising relevant laws, to 205 countries and regions.

In the report, the FATF pointed out that ongoing customer due diligence on bank accounts is insufficient.

Financial institutions have implemented stricter procedures to verify the identities of customers who want to open new bank accounts, but criminals exploited accounts that have long been unused in some cases.

The Financial Services Agency is calling on financial institutions to regularly send letters or emails to bank account holders to check their identities and their purposes of using the accounts.

But one major bank official said only around 40 percent of its customers reply to such letters. Many customers mistakenly think the letters are junk mail and throw them away, the official said.

A senior official of another major bank also said few customers respond to emails the bank sends for that purpose.

In response, the Financial Services Agency will consider urging financial institutions to implement additional measures, such as making phone calls, visiting homes or issuing warnings, to check the information of bank accounts at a high risk of being exploited. The agency plans to assign more inspectors to that task.

Developing and updating systems that can detect illegal activities add to the economic burden of financial institutions. In particular, those operating in regional areas are slow in developing such systems because they have fewer funds to spare.

The Japanese Bankers Association and other entities are preparing to put an artificial intelligence-based system into practical use that can be shared among banks.

A Japanese government official said that by tracing the flow of money, the hope is to wipe out entire criminal organizations, as more and more cases involve multiple criminal groups. The official also said judicial authorities can play a bigger role in cracking down on such crimes.

The government plans to increase the statutory maximum sentence for money laundering by revising the laws on punishing organized crimes and penalizing the financing of terrorism.

The Justice Ministry and the National Police Agency will set up a task force and conduct more educational training for their officials to prosecute more money laundering cases.

Though the FATF’s recommendations are not legally binding, the targeted nations and regions could face restrictions on financial transactions if their measures are deemed woefully insufficient.