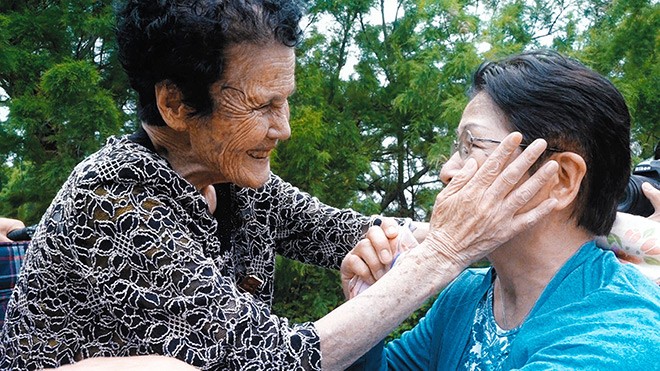 A scene from the documentary film where Keiko Hayashi, right, is reunited with her sister Aiko Nakamoto for the first time in 58 years in Hamhung, North Korea, in June 2018 (Provided by Nihon Denpa News)

When Aiko Nakamoto joined a repatriation program to North Korea in 1960, it never crossed her mind it would take nearly 60 years before she saw her beloved younger sister again.

That reunion, filled with hugs, tears and apologies for not having stayed in closer touch, took place in North Korea in 2018 when Keiko Hayashi, 70, embarked on her first trip overseas.

The poignant scenes, captured by filmmaker Yoma Shimada, form the backdrop of his documentary, titled “Chotto Kita-Chosen made Itte-kuruken” (I’m going just around the corner to North Korea), now showing in Tokyo and elsewhere.

Under the government-backed repatriation program, 93,000 or so ethnic Korean residents of Japan and their spouses relocated to North Korea between 1959 and 1984. Nearly 1,800 Japanese women accompanied their husbands to North Korea.

Shimada, 45, learned about those women still living in North Korea four years ago from journalist Takashi Ito, 69, who has long covered the country that cut itself off from the outside world.

The director works at Nihon Denpa News Co., a TV news agency that produces documentary programs about Southeast Asia, the Middle East and other regions.

Nakamoto, now 89, left for North Korea in 1960 with her husband, an ethnic Korean resident of Japan.

Hayashi used to look up to her sister, but she eventually lost contact with her. This was partly due to Nakamoto’s frequent written pleas for money and goods to help alleviate her impoverished circumstances in North Korea.

A total of 43 Japanese spouses were granted permission to temporarily return to Japan over three occasions between 1997 and 2000 based on an agreement between the Japanese and North Korean Red Cross societies.

Nakamoto was in line to make a temporary visit to her homeland in 2002, but it was canceled just before it was to take place due to worsening public sentiment in Japan over the issue of Japanese nationals abducted by North Korean agents during the 1970s and 1980s.

Nakamoto was devastated after she lost contact with her sister. But the letters she had kept for 30 years or so led Shimada on a quest to locate Hayashi, who was living in Ozu, Kumamoto Prefecture.

When Shimada showed Hayashi footage of her sister in March 2018, Hayashi felt a strong urge to see her again and made up her mind to visit North Korea.

In June that year, Hayashi and her second son obtained visas in Beijing to enter North Korea. The two sisters held each other tightly, tears clouding their eyes, as they mumbled apologies for their long and painful separation.

Hayashi returned to North Korea in July the following year to attend a wedding party for Nakamoto’s grandchild.

She also met five other Japanese women who told her they wanted to return to Japan temporarily to visit the graves of their parents and meet up with relatives.

Touched by the plight of those women, Hayashi set up a group called Nihon-Chosen Rainbow with her son in Japan to assist them regain ties with their hometowns and relatives while they are still alive.

Hayashi’s efforts have involved meeting family members of the five women and letting them know how they were coping in North Korea in the hope of encouraging the families to resume exchanges.

Hayashi moved to Zama, Kanagawa Prefecture, outside Tokyo, to continue the cause. She has visited Diet members and the Foreign Ministry to submit written requests for a resumption of temporary homecomings of Japanese spouses in North Korea.

Shimada accompanied Hayashi and her son to North Korea to capture the reunion of the two siblings. He also documented her activities after she returned home to make his first directorial project. The documentary has a running time of 1 hour and 55 minutes.

“I thought North Korea was a tightly controlled, terrifying nation, but when I went there I saw many real people with emotions living their everyday lives, Shimada said.