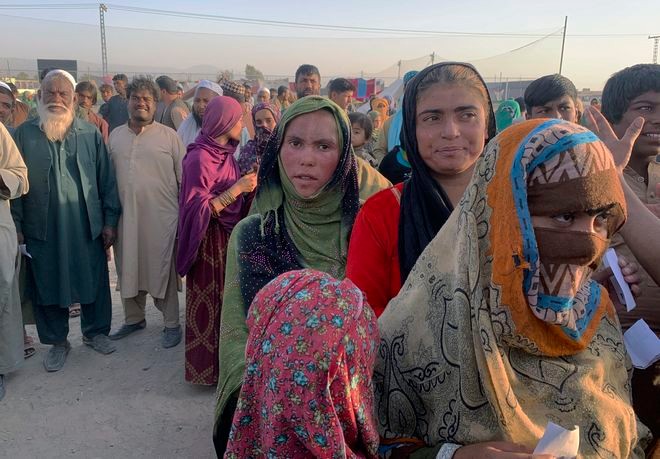 Afghan families gather to receive food stuff distributing by an Islamabad-based Christian organization on the outskirts of Chaman, a border town in the Pakistan's southwestern Baluchistan province on Aug. 31. (AP Photo)

UNITED NATIONS--The United Nations chief urged all nations to help the people of Afghanistan “in their darkest hour of need,” saying Tuesday that almost half the population needs humanitarian assistance to survive and the country faces the threat of basic services collapsing completely.

Secretary-General Antonio Guterres expressed “grave concern at the deepening humanitarian crisis in the country” in a statement on the first day of Taliban rule after the withdrawal of the last U.S. forces from Afghanistan.

He offered some grim statistics of the looming “humanitarian catastrophe”: 18 million Afghans need aid to survive, one in three don’t know where their next meal will come from, over half of all children under age 5 are expected to become “acutely malnourished” in the next year, and every day people are losing access to basic goods and services.

“Amid a severe drought and with harsh winter conditions on the horizon, extra food, shelter and health supplies must be urgently fast-tracked into the country,” Guterres said.

U.N. spokesman Stephane Dujarric said the current $1.3 billion U.N. humanitarian appeal for Afghanistan is only 39% funded. Guterres said a new emergency appeal for the next four months is expected next week.

“For us," Dujarric said, “the day after is just another day in Kabul. We’ve been present in Afghanistan for over 60 years, and we are remaining and standing shoulder to shoulder with the Afghan people.”

He said a U.N. assessment team went out in Kabul on Tuesday. While aid operations have not been able to resume in the capital, he said, a World Health Organization plane with supplies was able to land in Mazar-e-Sharif in the north on Monday and the World Food Program has also been able to resume operations in the country.

With the Taliban now in control of the country, Dujarric said the secretary-general would like to see, and hopes the international community would like to see, “the formation of an inclusive government, full respect for human rights ... especially when it comes to women, and to ensure that the hard won gains of especially the last two decades do not evaporate, and ensuring that Afghanistan is not used as a base for terrorism.”

As Afghanistan embarks on a new future, Pramila Patten, the acting head of UN Women, urged the Taliban to reaffirm their commitment to comply with Afghanistan’s 2004 constitution and international treaties that guarantee equality to all citizens, and to guarantee “the full and equal participation of women in the political and decision-making processes.”

Patten said in a statement the hard-won gains that Afghan women’s rights activists have fought for “cannot be reversed or rolled back.”

“Urgent action is needed now to ensure the full participation of women in the public and political life of Afghanistan,” she said, and the Taliban must ensure that women are protected from gender-based threats and attacks, “which violate their rights and impede their effective participation.”

They called on the Taliban and other parties in Afghanistan to respect the dignity and human rights of all Afghans, including boys and girls.