VOX POPULI: Japan must issue lifesaving visas to Afghans who are seeking help 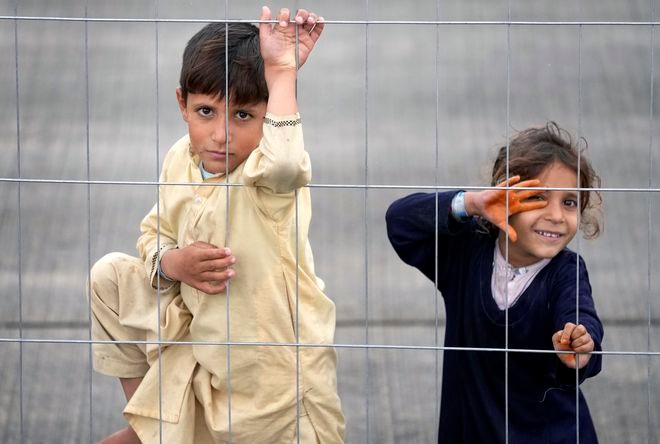 Two children peer out from behind a fence at Ramstein U.S. Air Base in Ramstein, Germany, on Aug. 30. The largest American military community overseas is housing thousands of Afghan evacuees in a tent city at the airbase. (AP Photo)

Sir Laurie Bristow, the British ambassador to Afghanistan, remained in Kabul after all his staff had left, so he could continue to issue exit visas to Afghan citizens who had worked for Britain as interpreters and in other capacities.

He flew home with the last of the British troops left in Kabul.

I should be careful not to draw simplistic comparisons between Japan and other nations that have their armed forces stationed in Afghanistan.

Still, I cannot completely shake off my misgivings about Japanese embassy personnel in Afghanistan who got out of the country, leaving their local staff behind.

Japan sent Self-Defense Forces aircraft to Kabul but failed to evacuate some 500 local hires and their families as planned.

But the story must not end there. Ensuring the safe evacuation of those people is a task the Japanese government must fulfill through diplomacy.

Kenji Isezaki, who visited Afghanistan as a special representative of the Japanese government after the collapse of the Taliban regime, told The Asahi Shimbun recently that Japan, which dispatched the Self-Defense Forces for offshore refueling activities during the war in Afghanistan, is one of the "combatant nations."

And he went on to point out that people who have strong ties to Japan are now in danger.

The concept of lifesaving visas is associated with Chiune Sugihara (1900-1986), a Japanese diplomat stationed in Lithuania during World War II, who issued exit visas at his discretion to hordes of desperate Jews who sought help from the Japanese consulate.

In "6,000-nin no Inochi no Visa" (Lifesaving visas for 6,000 people), a book written by Sugihara's widow, Yukiko, he is quoted as saying, "I cannot abandon people who came to me for help. To do so would be a sin."

His actions moved people deeply because they reflected his sense of morality as a human being.