EDITORIAL: What lessons can be learned from U.S. defeat in Afghanistan? 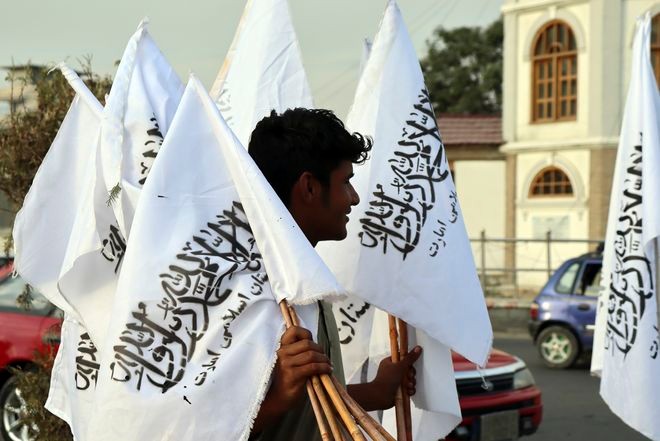 After 20 years of a combat presence in Afghanistan, the last U.S. military plane has departed from Kabul, ending the longest war in U.S. history.

The U.S. withdrawal at midnight, without any sort of send-off party, presented a picture of "historic defeat." What this war left behind is the tragedy of countless people victimized by violence under the rule of militant forces that haven't changed in 20 years.

Where did America go wrong and when in this war on terrorism that spread from Afghanistan to Iraq, apparently at the cost of around 800,000 lives and the equivalent of 700 trillion yen?

The United States, as well as the international community, needs to look squarely at this dismal defeat and try to draw lessons.

When U.S. President Joe Biden declared an end to the U.S. presence in Afghanistan, a local commander stressed the mission had been accomplished.

But the gulf between the U.S. message of withdrawal and deepening confusion in Afghanistan is too wide to bridge.

Tens of thousands of Afghans who worked and cooperated with foreign governments and armed forces over the past 20 years are still desperately waiting to be evacuated to safety. The United Nations projects that about 500,000 will have become refugees by the end of this year.

Whether the Taliban will allow people to leave Afghanistan in the days ahead waits to be seen. It is also uncertain which nations will take in the evacuees, and what will become of the human rights of women who are left behind.

Given the deteriorating stability, our worst fear is that Afghanistan will become a hotbed of terrorism again.

Biden asserts terrorists can be defeated from abroad. But if that implies something like drone air attacks, we would be extremely concerned.

According to a report from Kabul this week, children were among civilian fatalities in a U.S. drone strike. The absence of boots on the ground is bound to raise the risks of errant bomb attacks in the days ahead.

But Biden would not be deterred from sticking to his hasty withdrawal schedule, probably because he was confident that pulling out of this "forever war" had the full support of U.S. public opinion and would also serve the national interest.

Granted, the United States could not be expected to remain in Afghanistan forever. Still, it was unforgivably irresponsible to abandon the country at this time of extreme internal disarray.

If the people of Afghanistan are forced to endure more damage from continued airstrikes, it will further fan anti-American sentiment, which served as a tailwind for the Taliban in the first place.

And given that the hatred and moral decay in the hearts of people of "failed nations" formed the backdrop of the Sept. 11 terrorists' attacks 20 years ago, it is clear that America's mission is not only incomplete. It has been abandoned half way.

We should recognize that the United States was charting a mistaken course 20 years ago.

As the "sole superpower" in the post-Cold War world order, the United States invaded Afghanistan after the 9/11 terrorist attacks on U.S. soil and drove the Taliban from power. It then invaded Iraq and brought down the regime of Saddam Hussein.

The predominant belief at the time was that America could set up any political system of its choice anywhere by eliminating its "enemy" by armed force. But with the expansion of the "front line," America began to lose its initial interest in addressing the fundamental causes of terrorism, such as regional conflicts, poverty and social disparities.

With the slow progress of any regime change backed by armed force, the United States started committing human rights violations against "terror suspects" through long-term imprisonment and torture.

Biden stated to the effect that the U.S. mission in Afghanistan was not nation-building, but stopping acts of terror on U.S. soil. This was probably Biden's unwitting admission of the limits America was forced to face as a former superpower that used to exude confidence.

Inextricably mired in wars for 20 years, and more recently scarred by financial crises and "Trumpism," U.S. prestige and power has markedly declined.

America's honest feeling must be that unless some threat is directed at the U.S. mainland, it has no energy to spare for any problem in the world.

The withdrawal from Afghanistan symbolized the end of the era of unrivalled U.S. strength.

The task of stabilization and reconstruction of Afghanistan is now being passed on from military experts to diplomats, and entrusted to the international community.

The Biden administration's foreign policy is said to be now focused on America's power struggle with China and Russia, which have reacted by seeking to contact the Taliban through their own channels of communication to maintain their influence.

It is in the interest of the entire world to prevent Afghanistan and its environs from becoming a hotbed of terrorism again. The United States, China and other leading nations must move quickly to invite the Taliban to discuss ways to establish a structure of stability.

The international community contributed to Afghanistan's reconstruction in many ways, but the undertakings were invariably led by the U.S. military. In the days to come, the world needs to unite again under the United Nations and other international organs to set up new multinational anti-terrorism initiatives.

Why did the West European concept of nation-state fail to take root in Afghanistan's tribal society? Why can't extreme radicalism be eliminated? The first step to finding the answers lies in humbly starting dialogue with the Taliban's local representatives.

Japan participated in the U.S-led war on terror, and hosted the International Conference on Reconstruction Assistance to Afghanistan in Tokyo in 2002. So as not to let all the efforts of 20 years go to waste, Japan should start acting now to encourage international cooperation.