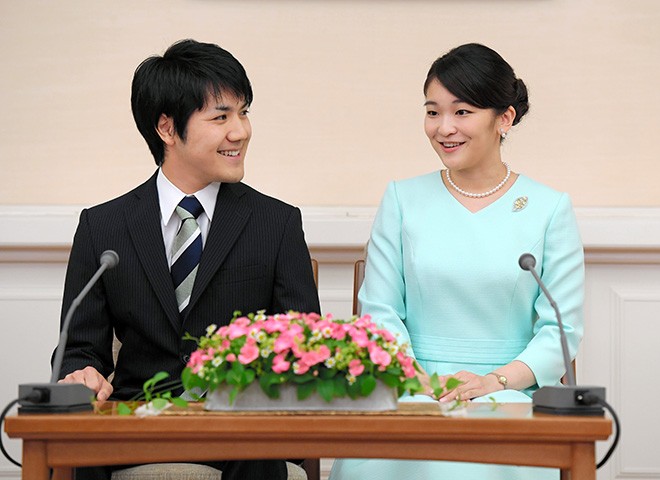 Princess Mako and Kei Komuro announce their plans to marry at a news conference on Sept. 3, 2017. (Pool)

Princess Mako will marry long-time boyfriend Kei Komuro without the pomp and circumstances that accompany an imperial family wedding and start a new life in New York by the end of the year, sources said.

Due to continuing opposition to their relationship from the public and concerns over the COVID-19 pandemic, no traditional imperial family ceremonies and rituals will be held in connection with the marriage, the sources said.

Mako, 29, will file the papers to resister the marriage in Japan. After withdrawing herself from the imperial register, she will move to the United States, where Komuro currently resides, according to the sources.

Traditionally, when a female member of the imperial family marries, the Nosai-no-Gi ceremony, which represents betrothal, and the Choken-no-Gi ritual, in which she meets and thanks the emperor and empress, are held before a wedding ceremony.

Komuro has lived in New York since 2018. He took the New York State Bar exam in July and is awaiting the result, which will be announced by December.

He is expected to work at a law firm in the state. Envisioning that the path is clear for them to have a financially stable life, Mako and Komuro have decided to tie the knot.

A female member of the imperial family, under the Imperial House Law, is required to remove her name from the imperial register upon marriage to a commoner.

Under the Imperial House Economy Law, female imperial family members are also guaranteed to receive a lump-sum payment upon marriage, which is funded by taxpayers’ money.

The payment is intended to be spent on accommodations and living expenses “in order to preserve the dignity of a person who was once a member of the imperial family.”

The amount is determined by the Imperial Household Economy Council, which consists of the prime minister and others.

But according to sources, Mako is considering declining the money because of the public antipathy toward the couple, which is mainly based on the alleged financial troubles of Komuro’s mother and the couple’s handling of the matter.

Taking Mako's reluctance into consideration, the Imperial Household Agency is expected to discuss if the amount of money provided to Mako can be reduced or if the princess can decline it.

Mako and Komuro announced their intention to marry in September 2017.

But in December that year, a weekly magazine dropped a bombshell report on Komuro’s mother, Kayo, detailing the history of her financial troubles with her former fiance, opening the door for a flood of scandals.

In February 2018, the Imperial Household Agency announced a postponement of their marriage.

The relationship has generated strong resentment from the public and the matter has become so controversial that even some in the couple's inner circle recommended they break off their de facto engagement, sources said.

But Mako and Komuro have insisted they would marry anyway, releasing a joint statement in November 2020, in which they called each other “irreplaceable.”