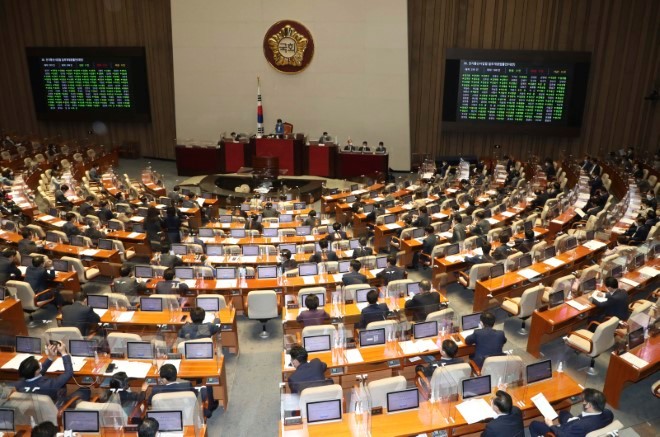 South Korea’s lawmakers attend a plenary session to proceed with pending bills at the National Assembly in Seoul. (Yonhap via AP)

SEOUL--South Korea’s National Assembly approved legislation on Tuesday that bans app store operators such as Google and Apple from forcing developers to use their in-app payment systems.

South Korea is reportedly the first country in the world to pass such a bill, which becomes law when it is signed by the president, whose party has backed the legislation.

The tech giants have faced widespread criticism over their practice of requiring app developers to use in-app purchasing systems, for which the companies receive commissions of up to 30 percent. They say the commissions help pay for the cost of maintaining the app markets.

The legislation prohibits the app market operators from using their monopolies to require such payment systems, which means they must allow alternative ways to pay. It says the ban is aimed at promoting fairer competition.

The bill aims to prevent any retaliation against developers by banning the companies from imposing any unreasonable delay in approving apps.

Regulators in Europe, China and some other markets worry about the dominance of Apple, Google and other industry leaders in payments, online advertising and other fields. Chinese regulators have fined some companies for antimonopoly violations, while other governments are wrestling with how best to keep markets competitive.

The Korea Internet Corporations Association, an industry lobby group that includes South Korea’s largest internet companies including search and online shopping giant Naver, welcomed the passage of the bill, which it said would create healthier competition and give users a wider variety of content at cheaper prices.

Google said it is considering how to comply with the legislation.

“Google Play provides far more than payment processing, and our service fee helps keep Android free, giving developers the tools and global platform to access billions of consumers around the world,” it said in a statement.

In the U.S., Apple last week announced that it had agreed to let developers of iPhone apps send emails to users about cheaper ways to pay for digital subscriptions and media.

The concession was part of a preliminary settlement of a lawsuit filed on behalf of iPhone app developers in the U.S. It also addresses an issue raised by a federal court judge who is expected to rule soon on a separate case brought by Epic Games, maker of the popular video game Fortnite.

The judge wondered why Apple couldn’t allow developers of apps like Fortnite to display a range of payment options within their apps.

Apple didn’t immediately respond to requests for comment on Tuesday about the South Korean legislation.

Over the past year, both Google and Apple reduced their in-app commissions from 30 percent to 15 percent for developers with less than $1 million in annual revenue--a move covering most of the apps in their respective stores. But the lower commissions don’t help the largest app makers like Epic and Spotify, which have taken their complaints around the world.

The European Union’s executive Commission has accused Apple of distorting competition by forcing developers to use its payment system as well as forbidding them from letting users know about cheaper ways to pay for subscriptions that don’t involve going through an app.

Dozens of U.S. states filed a lawsuit in July taking aim at Google’s store. Australian regulators, meanwhile, have also said they’re concerned about restrictions on in-app purchases that mean developers “have no choice” but to use Apple and Google’s own payment systems, according to an interim report into the dominance issued in April.