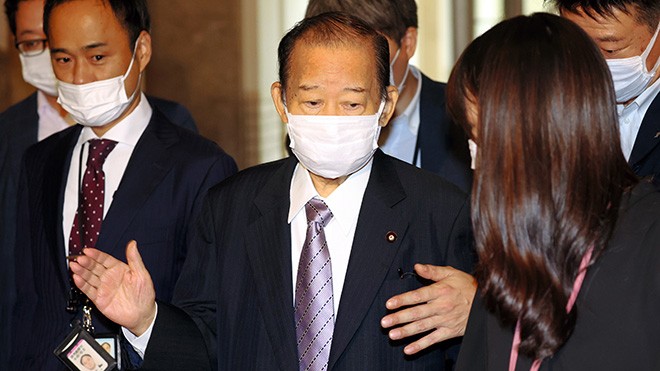 Toshihiro Nikai, the long-serving secretary-general of the ruling Liberal Democratic Party, heads for a meeting in the Diet building on Aug. 31. (Koichi Ueda)

Prime Minister Yoshihide Suga found himself accused of taking desperate steps to cling to power with his decision to dump a powerful executive of the ruling Liberal Democratic Party viewed by many as having been instrumental in elevating Suga to the top in the first place.

Suga, 72, has made clear he intends to replace all top LDP executives early next week, including long-serving Secretary-General Toshihiro Nikai, in a bid to freshen up the party's image ahead of a crucial Lower House election in October.

Nikai, who is 82 and has served for more than five years in the executive post, was the first top LDP official to come out in support of Suga last year before the LDP presidential election that September. His backing led other LDP factions to jump on the Suga bandwagon, ensuring his victory even before the election campaign got under way.

Fast-forward a year and many members of Nikai's LDP faction are biting in their criticism of what they regard as Suga's act of betrayal.

A close Nikai associate scathingly described Suga's action as “cutting his own legs with his own hands.”

Lawmakers in other LDP factions were nodding their heads in agreement at the furor that has erupted.

“There will be no meaning unless the person at the very top is replaced,” said a member of the faction led by longtime Finance Minister and Suga ally Taro Aso. “Employees of a company in the red would not be convinced if only executives were replaced and the company president who produced the deficit remained in his post.”

Reports that Suga was also planning to have his Cabinet approve the date of the Lower House election rather than dissolving the chamber to call a snap election raised suspicions that this was intended purely to ensure he remains at the helm as LDP president.

Cabinet approval of the election date is possible when the term of Lower House members is close to expiring, as is currently the case due to the prolonged pandemic.

One proposal under consideration is to hold the Lower House election on Oct. 17 and have the Suga Cabinet approve that date while the LDP presidential election campaign is in progress. The vote in the LDP leadership race will be held on Sept. 29.

If the Lower House election date is approved, lawmakers would more than likely head straight for their constituencies to gear up for the election. That in turn would probably reduce the chances of them interfering in the party presidential campaign.

One government source called the move an attempt to turn the LDP presidential election into an event in name only.