Couple met girl to talk, but then decided it was better to kill her 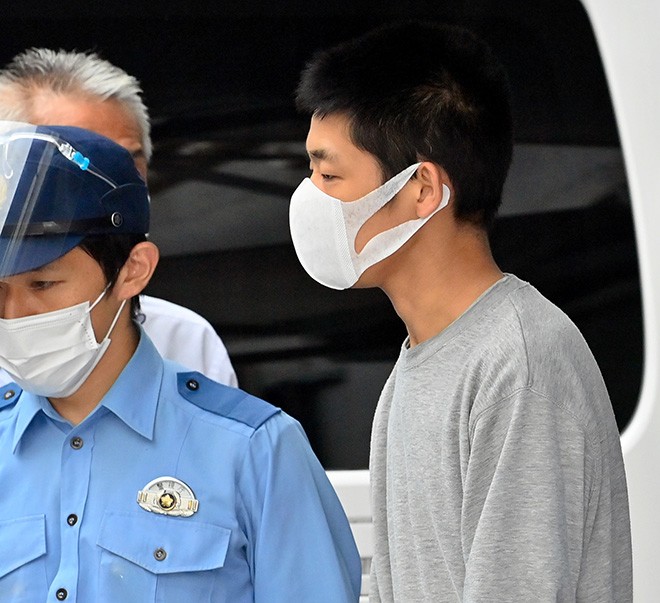 Shohei Komori, a key suspect in the death of a Tokyo high school student, leaves Mukojima Police Station in Tokyo’s Sumida Ward on Sept. 1 after his case was referred to prosecutors. (Hiroyuki Yamamoto)

A Tokyo high school student found murdered in central Japan was in frequent contact through a social networking site with the husband of the couple suspected of killing her.

They were in contact so often that the wife eventually got jealous.

Things reached the point where it was decided that the only way to resolve matters was for the three of them to meet.

That occurred Aug. 28 when 18-year-old Kana Washino, a resident of Sumida Ward in the capital, left home around 3:30 p.m. after telling her family she was off to see a friend and would be back soon.

It turned out the couple had driven from their home in Shibukawa, Gunma Prefecture, to pick up the girl so the three of them could chat.

Tokyo police called an early morning news conference Aug. 31 to announce that Washino's body had been found on a remote property in Yamanashi Prefecture.

She had been stabbed four times in the back and her neck bore marks of having been strangled with a rope. Her body was dumped in an outbuilding on the property.

Shohei Komori, 27, and his wife Izumi, 28, were arrested on suspicion of abandonment of her body the same day.

Komori told police he had been in contact with Washino via SNS, which had irritated his wife greatly. It was finally decided that the three of them should find an opportunity to talk together, but when that happened the wife was not happy with the outcome.

Police referred the case to the Tokyo District Public Prosecutors Office on the morning of Sept. 1.

After Washino left her home on Aug. 28, she spent the night at the couple’s home in Shibukawa city, investigative sources said.

The couple is suspected of abandoning her body in a mountain village in Hayakawa, Yamanashi Prefecture, on Aug. 30.

They also admitted to killing her in an outbuilding on the property, where the rope apparently used to strangle her was found, according to investigative sources.

Police said they found no traces of Washino's blood in the car, which led them to suspect couple was telling the truth about where the girl was killed. The outbuilding was padlocked when police arrived, adding to suspicions the couple was intent on hiding the body.

“I came to know her on the SNS about two years ago and communicated with her,” Komori was quoted as telling police. “My wife was jealous of that.”

“I wanted him to cut off all communications, so I tried to have a talk among three of us,” his wife said.

Security camera footage in the vicinity of Washino's home showed her climbing into a passenger car driven by the couple.

Police speculated that the three of them took a drive on the evening of Aug. 29 and reached the property the following day where Washino met her end, investigative sources said.

“We searched for a place to kill her,” police quoted one of the couple as saying.

The police suspect they opted to kill Washino after the talks on ending the relationship went nowhere.