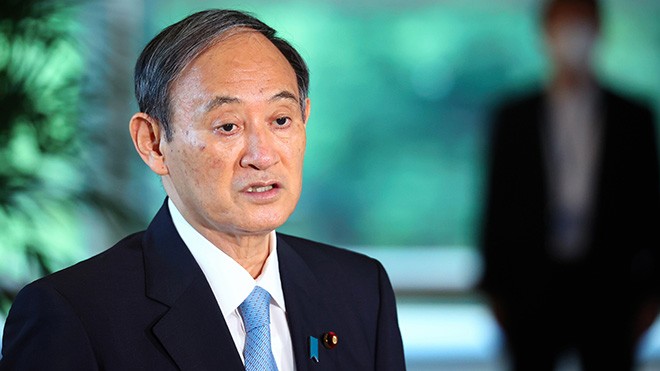 Prime Minister Yoshihide Suga, speaking with reporters Sept. 1, says a Lower House dissolution this month is not in the cards. (Koichi Ueda)

Prime Minister Yoshihide Suga found himself back pedaling in the face of fierce criticism within his ruling Liberal Democratic Party triggered by reports he was thinking about dissolving the Lower House, which would effectively push back the date for the LDP presidential election to be held.

Suga was asked by reporters Sept. 1 for comment on reports he told Toshihiro Nikai, the LDP secretary-general, during a meeting the previous day that a Lower House dissolution in mid-September was one option he was considering.

Suga said in reply: “My priority is on dealing with the novel coronavirus pandemic. Under the severe circumstances that we face now, it would not be possible to dissolve the Lower House.”

In line with the report that Suga had told Nikai that a mid-September Lower House dissolution was one option, a senior government official was quoted as saying: “One option is to push back the LDP presidential election. The ultimate decision will be made by the prime minister.”

But that report triggered sharp criticism within the LDP, forcing Suga to state that he had no intention of dissolving the Lower House in September.

One move being considered for the Lower House election is to have the Suga Cabinet approve the date without the prime minister dissolving the chamber. That alternative is possible when the term of Lower House members is close to expiring, as is the case now.

Under that plan, the Lower House election campaign would formally begin on Oct. 5, with the vote to be held on Oct. 17.