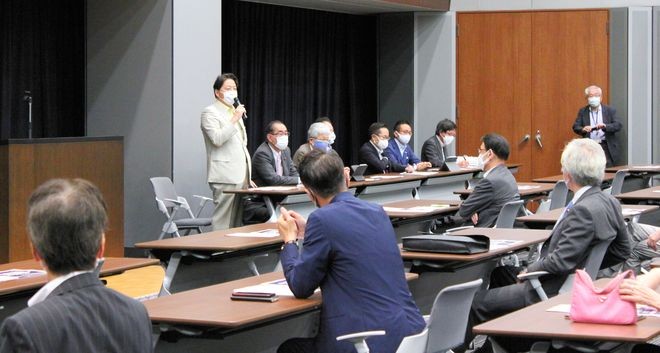 Lawmakers from both the ruling and opposition parties attend a general meeting on June 10 in Tokyo to mark the formation of a political group pushing to set up an independent fiscal institution to monitor government spending. (Provided by the office of Lower House member Yoshihisa Furukawa)

Lawmakers from across the political spectrum joined forces to put a cap on Japan’s mushrooming annual expenditures by forming a body to help the Diet thwart the government and ruling parties from forging ahead with projects the nation can ill afford.

The decision to establish an independent fiscal institution (IFI) offers an opportunity for Tokyo’s fiscal health to be analyzed from a neutral perspective, which in turn, should allow for more in-depth crystal ball gazing of longer term prospects while keeping a distance from the government and political parties.

Such setups are fairly common in industrialized countries, but Japan is a newcomer to this way of thinking.

“It would be marvelous if financial estimates can be made from an independent standpoint for the Diet, so discussions can be held from diverse viewpoints,” said former education minister Yoshimasa Hayashi, who helped set things in motion. “Certainly, voters would be interested in watching the process of compromise.”

Hayashi, a former Upper House member of the ruling Liberal Democratic Party who quit Aug. 16 in preparation for the Lower House election that must be held by autumn, was a driving force in setting up the body.

Other co-founders include Makoto Nishida, who heads the Upper House members from the LDP's junior coalition partner Komeito, and Seiji Osaka, a special adviser to the president of the main opposition Constitutional Democratic Party of Japan.

Comprised of 39 individuals from six major parties, the group will work toward setting up a Japanese version of an IFI in the Diet within a few years.

IFI refers to an autonomous body publicly funded to neutrally analyze and assess a state’s financial situation and spending, and make proposals to the government when necessary.

Unlike the Board of Audit, which simply confirms whether allocated budgets were used properly, the body is expected to go further by evaluating the cost effectiveness of policies to be implemented in the future.

According to the Organization for Economic Cooperation and Development, 28 of its 36 member states had their own IFIs as of 2019. Japan is the only Group of Seven nation with nothing of the kind.

IFIs became common overseas partly as a result of the 2008 collapse of U.S. investment bank Lehman Brothers, which triggered a global slowdown. At the time, many countries focused on large-scale pump-priming measures, which rapidly depleted their finances and raised awareness of the need for budget oversight.

With 260 or so staff members, the U.S. Congressional Budget Office estimates the possible impact that bills submitted to the Congress will have on the future finances. The Netherlands Bureau for Economic Policy Analysis assesses the financial impact of each party’s campaign pledges and policies released ahead of general elections.

By providing objective data for decision-making, IFIs help to promote constructive discussions and allow third-party experts to more thoroughly verify and assess the conclusions reached by politicians and the government.

The government has failed to attain financial recovery goals and repeatedly postponed them because the targets were invariably set on the basis of optimistic estimates that presuppose high growth rates.

As a result, the balance of government bonds, basically the national debt, is forecast to top a whopping 1 quadrillion yen ($9.07 trillion) by the end of fiscal 2022, more than 200 percent of Japan's domestic gross product. The rate is by far and away the highest among industrialized nations.

In spite of this, the Diet, which is charged with monitoring the the government’s financial outlays, does not have objective information to hand to pinpoint potential problems, rendering it difficult to serve as a watchdog.

For this reason, Keizai Doyukai (Japan Association of Corporate Executives) in 2019 suggested that the Upper House incorporate an IFI into its setup.

Inspired by the business community’s proposal, coupled with massive and unexpected additional spending due to the health crisis, the multipartisan group swung into action.

Zentaro Kamei, a specially-appointed professor of public policies at Rikkyo University’s graduate school in Tokyo who is well-versed in the way IFIs operate, joined calls for such an independent body to be set up within the Upper House with private experts serving as staff members.

“Comparing government data with the figures offered by the Congressional Budget Office is taken for granted in the United States to assess the merit of policies,” he said. “It is important for politics and society to take future generations’ viewpoints into account.”