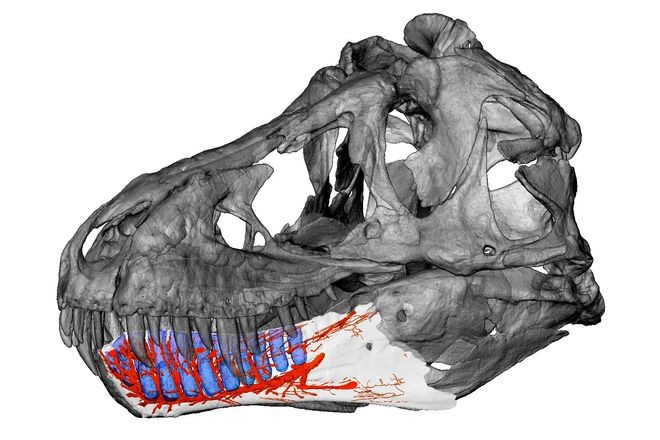 Neurovascular canals are highlighted in red in the image of a tyrannosaur’s lower jaw created with computer graphics based on CT scanning. (Provided by Soichiro Kawabe, an associate professor at Fukui Prefectural University’s Dinosaur Research Institute)

FUKUI--The jaws of the mighty tyrannosaur were armed with such high-sensitivity tactile sensory glands that the beast was able to differentiate between when to deftly carry its offspring in its mouth or rip apart the flesh and bones of prey, new research suggests.

“It appears that tyrannosaurs might have been able to move their mandible delicately in order to transfer their offspring between their teeth and to remove bones from flesh before they consume food,” said Kawabe. “I believe this discovery sheds new light on their biology.”

In January 2020, Kawabe scanned a lower left jaw fossil of a specimen kept at the Fukui Prefectural Dinosaur Museum in Katsuyama. The fossil, unearthed in the U.S. state of Montana, measures 89 centimeters by 10 cm by 28 cm.

The results showed the tyrannosaur’s neurovascular system is far more complex than that of ceratopsians and ornithopods.

Its nerves were more branched and densely packed at the jaw’s tip in a way comparable to that of crocodiles, which also have jaws with high tactile sensitivity and awesome bite power.

Crocodiles have been observed cracking open the eggs of their hatching and tenderly carrying their offspring in their jaws, which are also able to detect slight differences in water temperature and flow.

Tyrannosaurs inhabited what is now North America during the late Cretaceous Period around 68 million to 66 million years ago and are thought, based on fossil records, to have walked on two legs and grown to lengths of 12 meters or more.

Though many studies have been done on the upper part of tyrannosaur skulls, this was the first time to undertake a detailed survey of the lower jaw.