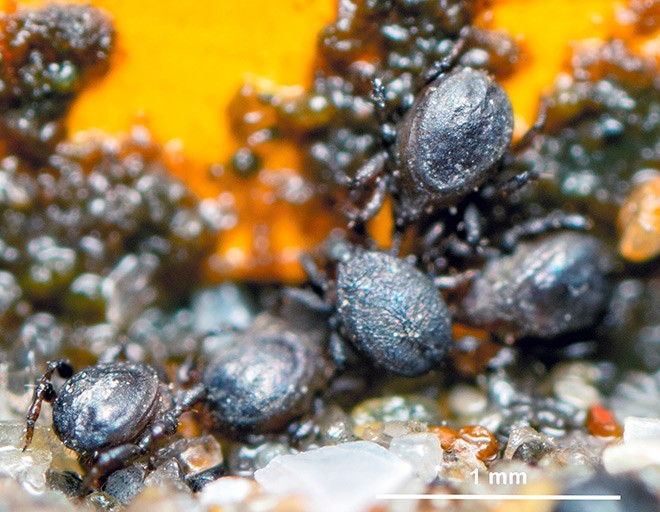 A new mite species, Choshi hamabe dani, was given the scientific name Ameronothrus twitter after it was discovered via a photo posted on Twitter. (Photo taken by Takamasa Nemoto)

Every so often, social media turns out to be an invaluable resource for those studying the natural world in discovering new animal and plant species.

As its scientific name, Ameronothrus twitter, suggests, the arachnid’s existence might not have come to light had it not been for a photo that an amateur photographer posted on Twitter in May 2019.

Takamasa Nemoto, a company employee, often snaps photos of mites. But he was unfamiliar with ones he found near a port while out on a fishing trip with his family.

His tweet, with the photo of a mite cluster, found its way to Shimano by chance.

Shimano instinctively thought a new discovery was in the offing because he saw unfamiliar characteristics, such as wrinkles on the back of the mites.

Although Shimano was not acquainted with Nemoto, he immediately got in touch and asked where he took the photo.

Two days after the tweet was posted, Shimano visited the site and collected samples.

After close observation, he concluded that the mite was a new species.

“Social media is helping to speed up discoveries of new species,” Shimano said. “Many unknown creatures still remain buried in social media (because they have not come to the attention of people in the know).

Takuro Ito, an assistant professor of botany at Tohoku University, found a new species of plant, Sedum boninense, based on a tweet that mistakenly identified it.

The Tokyo metropolitan government’s Ogasawara Island Branch Office unwittingly described the succulent plant found in the Ogasawara island chain south of Tokyo as an existing species when officials posted its photo on Twitter in 2016.

But Ito thought the plant must be a different species based on the season in which it blooms and the way it forms a colony.

His hunch proved correct, and the plant was announced as a new species in June last year.

Such discoveries are not confined to Japan.

When an amateur insect enthusiast posted a photo of a locust found in the Philippines on Facebook in 2014, it caught the attention of an expert.

A team of researchers from the Central Mindanao University and other institutions reported in 2016 that it was a new species of Tetrigidae, a family of insects similar to crickets and grasshoppers.

While smartphones allow anyone to share their photos and experiences online, rare animals and plants could be placed at risk from unscrupulous traders if their habitat information is disclosed.

Rare species are sold via online auctions and other means. Even endangered creatures are not always protected by regulations.

In some cases, a photo of a creature posted on social media led to overexploitation after an unethical trader discovered the location based on previous and subsequent posts and other information.

“Profitable creatures such as amphibians, reptiles and insects are of particular concern,” Shimano said.

Ito said habitat information should be disclosed carefully although it depends on the rarity of the species, its conservation status and other conditions.

“When people post a photo, they need to pay attention to things like what can be seen in the background and the location data of the image itself,” he said.