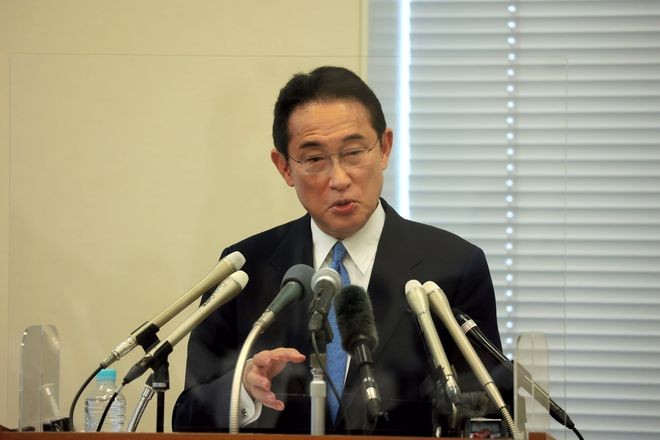 Kishida added that as party chief he would aim to bring socioeconomic activities back to near normalcy by early 2022, criticizing the current handling of the pandemic as too little and too slow.

The party leader contest is slated for Sept. 29, and the government is considering a plan to hold the general election on Oct. 17.

Late on Wednesday, Japan’s minister for digital transformation became the first serving cabinet member to openly back Kishida in the race for ruling party chief.

The move marked another turn in the rollercoaster week that saw the unpopular Suga come to the brink of calling a snap election on Tuesday night, only to deny the reports by Wednesday morning after party grandees, including his powerful predecessor Shinzo Abe, intervened to stop him, local media said.

In a series of maneuvers to cling on to his job, Suga is set to remove his unpopular long-term ally Toshihiro Nikai from a key ruling Liberal Democratic Party (LDP) post. It is a part of a reshuffle expected next week that will likely bring several high-profile names to both party executive positions and Suga’s cabinet as the premier strives to shore up his support.

When launching his candidacy last week, Kishida said he would aim to reduce income gaps and support the economically vulnerable such as workers in insecure jobs and women, an apparent effort to differentiate his stance from Suga, who has stressed self-reliance before public support.

The low-key Kishida, 64, has ranked poorly in surveys of voters’ preferred next prime minister.

Suga, 72, took office last September with support of about 70 percent but his ratings have sunk to record lows below 30 percent as Japan battles its worst wave of COVID-19 infections and many of his LDP lawmakers fear for their seats.