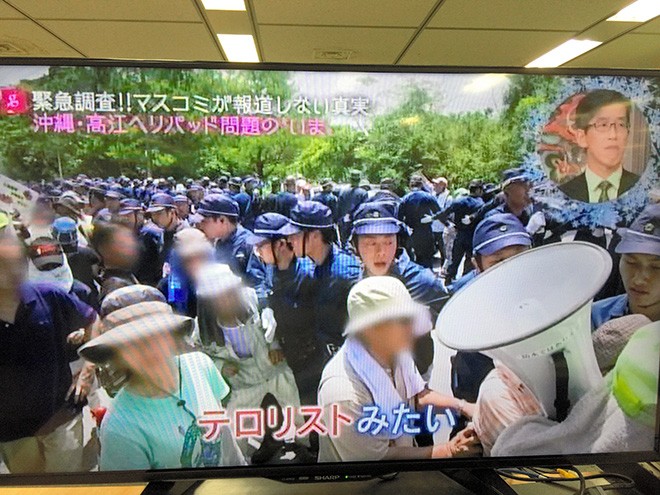 Footage from a report on opponents of U.S. military bases in Okinawa Prefecture produced by DHC Television Co. on Jan. 2, 2017. The subtitle at the bottom reads: "They look like terrorists." (Asahi Shimbun file photo)

A TV news show that called Okinawa protestors of U.S. military helipads "terrorists" in a report defamed them, the Tokyo District Court ruled on Sept. 1.

The court ordered the company that produced the show, DHC Television Co., to pay 5.5 million yen ($50,000) in compensation, siding with a co-leader of human rights group Norikoe Net, who sued the company for libel over the report on the anti-U.S. military movement in Okinawa Prefecture.

The court also ordered DHC Television to post an apology on its website to the plaintiff, Shin Sugok.

Shin hailed the court decision during a news conference after the verdict, calling it “epoch-making.”

“The program continued to deride Okinawans through fake reports,” she said. “The court ruling made clear its problem.”

DHC Television is set to appeal the ruling.

The report on the activists was broadcast for two days in January 2017 during the program “News Joshi” (News girls) by Tokyo Metropolitan Television. It depicted their activities protesting the construction of helipads for the U.S. military in the northern part of Okinawa Prefecture.

In the ruling, the court acknowledged that the report was presented as if Shin “gave financial support to and agitated participants of the anti-military movement who did not hesitate to use violence and commit criminal activities.”

The court went on to say: “the main purpose of Shin’s group sending a ‘citizen correspondent’ to Okinawa Prefecture by offering 50,000 yen in airfare was to report on demonstrators’ activities on the ground, not to instigate the opposition movement.”

Shin urged protesters to stage a sit-in on the road to block the passage of trucks involved in the helipad construction.

But the program labeled them “terrorists” and accused them of “attacking.”

The court ruled that the TV program underscored the possibility of the demonstrators using heightened violence and gave that impression to viewers with the portrayal.

The court also pointed out that DHC Television did not interview Shin and her group and that there were no grounds to call its portrayal of them truthful.

But the court rejected another demand of Shin’s, that Yukihiro Hasegawa, a former deputy editorial writer of The Tokyo Shimbun, who served as the host of “News Joshi,” also pay damages to her.

“He played no part in planning and producing the program,” the court said.

Hasegawa argued that Shin made baseless accusations against him by claiming that he made discriminatory comments, although he was just serving as the host.

The court, however, rejected his suit.

Referring to Shin, the court said, “The program caused her great damage and what she said concerning him was in the acceptable range.”