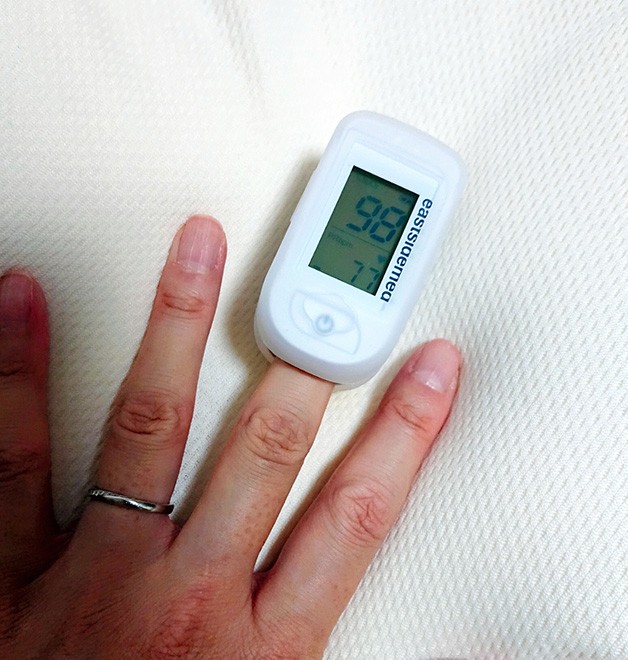 The Tokyo woman uses a pulse oximeter to measure the oxygen-saturation level of her blood. (Provided by the woman)

A 40-year-old woman living in Tokyo took to social media to chronicle her fears and worsening health while she was stuck at home recovering from COVID-19.

She searched through hashtags for information about how to handle the illness and was initially encouraged by the large amount of interaction she received.

“Morning of Aug. 12: Maybe I should buy a pulse oximeter (to measure the oxygen saturation level in my blood). I have no idea when the one from the local government will be delivered,” she tweeted.

The woman was diagnosed with COVID-19 the previous day.

Her 37-year-old husband had complained about throat pain and other symptoms starting on Aug. 6, and he was confirmed to have COVID-19 on Aug. 9.

The woman worked at a part-time job she could walk to, while her husband worked remotely from home. During the pandemic, they only left their residence to shop or have lunch on weekends. That has made it difficult to determine how they became infected.

Her husband had still not received any word from the local public health office. So, she began to post on her Twitter account again, which she had not used in about two years.

“Morning of Aug. 12: I spend every day worried because there has been no contact from the public health office, nor any instructions or support from the local government,” she tweeted.

Later that day, her husband received word from the public health office that he was to recuperate at home. This came three days after his infection was confirmed. Her husband was told delivery of a care package containing food sent from the Tokyo metropolitan government would be delayed. The couple luckily received food products they ordered online the day before.

Normally, the woman's temperature hovers between 36 and 36.5 degrees. But it was fluctuating above 37 degrees. She also was bothered by a cough and runny nose. She became somewhat relieved searching for information on Twitter when she found that many others infected with COVID-19 were suffering similarly.

“Afternoon of Aug. 13: I finally received a call from the public health office. Like my husband, it was a clerical worker. I am somewhat worried because I was not asked many detailed questions.”

The caller explained that normally a public health worker would be asking the questions, but everyone else at the office was busy.

The woman felt she has been left to fend for herself.

“I am the only one capable of protecting myself,” she thought.

The phone call lasted about 20 minutes. She was asked about her health condition and whether she had other family members. The woman was not asked if she worked, nor about what she did up until the time she became infected.

She had realized she was infected when she lost her sense of smell.

In the evening, the pulse oximeter was delivered to their mailbox.

The woman began worrying about whether she would be able to wake up the next morning. Her symptoms changed daily, but still included a fever, a cough, a runny nose and the loss of her sense of smell.

Her fever also went over 37 degrees at night. She tried to take her mind off her condition by responding to tweets or using the Line messaging app, with her husband recuperating in a different room, and talked about their hobbies.

“Afternoon of Aug. 16: My husband’s recuperation period ended today because his fever was under 37.5 degrees for four straight days even without taking any medication to reduce the fever. But he still has a cough and problems with his sense of smell.”

That same day, the woman received her second call from the public health office. She was told that because her condition had stabilized, the next call would be on Aug. 20, when her recuperation period was scheduled to end.

She told her husband, “It’s all right that my symptoms are mild, but it would have been really worrisome had my condition worsened.”

“Afternoon of Aug. 18: In reality, this is not recuperating at home, but being neglected at home. If we become infected, we must do something about it ourselves. It is a major mistake to think support will be provided by the central or local governments.”

That tweet came in response to news reports about a family of three in Tokyo that became infected. The family’s mother, in her 40s, had died while recovering at home.

The ward government website states, “Phone calls will be made daily during the recuperation period to check on the patient’s health.” But the woman had only received two calls from the public health office. And she would have run out of food, had she not taken measures on her own to have produce delivered.

“Afternoon of Aug. 20: I can return to my normal life as of tomorrow. But the infection-prevention measures we had been taking will no longer be enough. We will have to be even more careful from now on.”

The woman received her third phone call from the public health office on the afternoon of Aug. 20 and was told her recuperation period was over. On the evening of the following day, she went to a neighborhood supermarket--her first outing in 11 days.

While the wind felt refreshing, the woman said her throat is still not 100 percent, and she still suffers from a cough and the loss of her sense of smell.

But since she never found out how she became infected, she feels even more fearful about going out now.

In November 2020, the Tokyo metropolitan government set up a follow-up center to check on the health of COVID-19 patients recovering at home. The measure was intended to reduce the burden on public health offices.

But with the sharp increase in the number of those sent home to recuperate, only patients under 40 could use the follow-up center as of Aug. 26. Patients 40 and older are being handled by public health offices.

But according to sources, public health offices have been unable to quickly contact patients, so the requests often only land days after the patients have been confirmed with COVID-19.