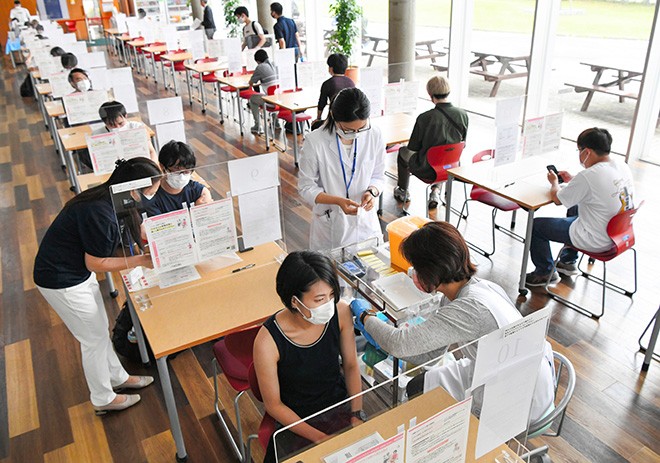 Vaccinations against COVID-19 are given at a venue on the campus of Shonan Institute of Technology in Fujisawa, Kanagawa Prefecture, on June 21. (Takayuki Kakuno)

People fully vaccinated for COVID-19 possibly cut their chances of catching the virus by 90 percent compared to those unvaccinated beginning from two weeks after their second shot, a new study shows.

But the vaccines had little potency in protecting people from infection between the first to 13th day after their first vaccination, the research by the National Institute of Infectious Diseases also found.

The NIID announced the findings of its study on the efficacy of the vaccines against the novel coronavirus at meeting of a health ministry expert panel on Sept. 1.

The institute also found that people supposedly have about 70 percent less incidence rate of testing positive for the virus from 14 days after their first vaccination until 13 days after their second shot compared to unvaccinated individuals.

Some people in the study, however, still tested positive even after they were fully vaccinated.

“It is still important for vaccinated people to continue to take anti-virus measures,” a health expert advised.

The NIID conducted the research targeting 1,130 people who had symptoms of the virus, such as a fever, and went to one of the five medical institutions in Tokyo between June and July.

It asked participants whether they had been vaccinated or not, tested them for the virus and compared the ratios of positive and negative results.

The research institute's results confirmed data in Japan similar to that which has been reported abroad on the efficacy of the vaccines.

Clinical tests abroad by Pfizer Inc. and Moderna Inc. had shown that their vaccines can reduce the incidence rate by about 90 percent among vaccinated people, compared to those who took placebos.