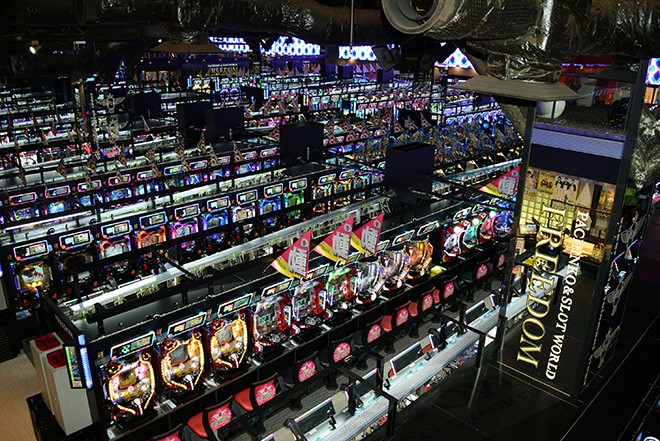 Freedom, a pachinko parlor in Osaka’s Kita Ward, offers its premises as a site for a workplace-based COVID-19 vaccination program. (Daisuke Yajima)

OSAKA--A popular pachinko parlor in a busy shopping street in central Osaka caught locals by surprise with a promotional move that for a change did not involve newly installed “lucky” pinball machines or special “keihin” prizes--and hit the jackpot.

Hundreds of people rushed to the parlor’s counter, hoping to secure a spot for the special offering. Not a carton of cigarettes or anything of the sort, but a shot of COVID-19 vaccine.

Inside, an array of more than 1,000 pinball and slot machines entice players to keep spending money while rousing music normally plays at full blast.

But a signboard recently posted at the entrance says, “This is a vaccination center.”

But during those four days, the parlor’s seats will be filled with its employees and their family members, staff of client companies, members of a neighborhood shopping district promotion association and members of the local community, among others.

With a sleeve rolled up or attired in a T-shirt of something similar, each individual will be seated in front of a slot machine with a shield and space to ensure reasonable social distancing.

Doctors will be on hand to administer Moderna’s COVID-19 vaccine.

NOT A PUBLICITY STUNT

Junki Hirakawa, the 51-year-old president of Avance Co., which operates the parlor, said commitment to the community lay behind the unique project.

“For business, community is important,” he said.

Hirakawa added that the current surge in COVID-19 cases, coupled with the fact that many patients are forced to suffer at home due to a shortage of hospital beds, had left him distressed.

“Dying from pneumonia at home is inconceivable to me,” he said. “I just wanted to offer a positive response in these challenging times.”

Hirakawa noted that he learned about the central government’s call for businesses and others to join its workplace-based inoculation program in June.

Before the end of the day, he told employees, “We should do it.”

Akira Kawano, the 40-year-old manager of Freedom, was completely taken by surprise.

“It's an idea no one else would ever come up with,” he said.

Suspending pachinko operations for four days will result in a loss of revenue amounting to tens of millions of yen.

But Hirakawa, who opened a pachinko parlor that became the predecessor of Freedom in 1997, views the loss as a strategic marketing tool and an opportunity to change the public’s negative perceptions toward the pachinko industry, now grappling with a shrinking market.

Pachinko operators found themselves targets of criticism as the pandemic continued to rage, and especially after states of emergency had been declared, over the sight of people forming long lines before the parlors opened and then spending all day playing pinball in congested spaces in the hope of winning prizes that surreptitiously can be exchanged for cash.

Transforming the parlor into a mass vaccination center would “do some good in the community and also change our image for the better,” Hirakawa thought.

That was enough to convince Kawano.

“It’s like, ‘Lose a dime and win a dollar,’” the manager quipped. “I like to take a long-term, big-picture approach to business.”

Several days later, Kawano filed an application to participate in the government’s program. To secure sufficient health care staff to provide inoculations, he sought support from a nearby general hospital, which readily agreed to his request.

It turned out that the spacious hall, well-equipped with air conditioning systems, was an ideal setting to operate a mass inoculation center.

As an anti-virus measure, plastic shields had already been set up to separate each seated player. The parlor is close to Tenroku, an area popular with young people.

“It is perfect!” a hospital representative said.

Vaccine recipients must be at least 18 or older and bring ID to the parlor to make an appointment. The company announced the program on its website and social media.

Some people criticized the step as a pure publicity stunt.

But Hirakawa was having none of it.

“When you take action that has a social impact, it has to be conspicuous,” Hirakawa said. “Then others might start copying what we've done and the image of the industry as a whole will improve.”

So far, the plan has gone over well among customers.

“I just laughed, because it’s such a conscientious (offer),” said a 50-year-old man who works at a construction company.

“Everybody is desperately looking for a vaccine. So why not?” he said while puffing on a cigarette outside the parlor.

A 46-year-old woman who works at a shipping company gave the thumbs-up, too.

“At first I thought, ‘Huh?’ But then I realized it actually makes sense,” she said.

Delays in the delivery and distribution of Moderna’s COVID-19 vaccines have played havoc with the government’s workplace vaccination program.

“My company’s workplace vaccination plan has not progressed as planned,” the woman said. “Many people are in need of the vaccine. I hope the (parlor) will open up for the (inoculation) again.”