Shocking method found to wipe out parasites while retaining flavor 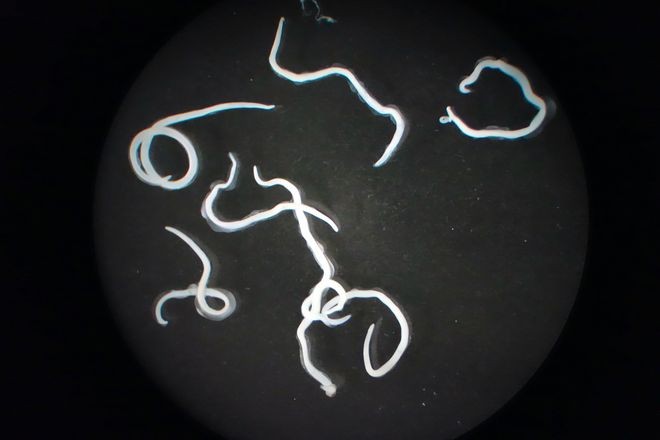 The bodies of Anisakis parasites are whitish after processed and killed by pulsed power. (Provided by Kumamoto University and Japan Seafoods Co.)

Dangerous parasites are an unwelcome intruder into fresh seafood, but ridding them has been problematic through heating and freezing, which can damage the flavor and texture.

Now, a researcher has developed a new method that uses pulsed power, or strong electric energy generated instantly, to zap the parasites and remove them, preserving the quality and taste of sliced fish for eating raw.

Namihira and his colleagues released accumulated electric energy in an instant to produce huge electricity called pulsed power. The team placed Anisakis in filleted horse mackerel so that the fish would be exposed to pulsed power in a container.

The results showed instant electric energy succeeded in killing off the parasites in 3 kilograms of sliced mackerel in six minutes.

The seafood’s temperature rose a paltry five degrees or so with electricity application, and its taste and feeling in the mouth were kept at such a high level that they could still be served as sashimi.

How pulsed power killed Anisakis remains unclear, while the technology has been confirmed to break only cancer cells’ membranes. According to the team, it was the first time that pulsed power was utilized for removing parasites.

Measuring 2 to 3 centimeters in length, the larvae of the parasitic nematode inhabit internal organs of fish. They shift to muscle tissue over time after their hosts die.

If Anisakis-tainted sashimi and other kinds of seafood are consumed, the parasite bites into the eaters’ gastric and intestinal walls to bring about serious abdominal pain, nausea and other symptoms.

There are no therapeutic agents to deal with the conditions so they have to be eliminated through endoscopy or other means.

The health ministry recommends as a precaution that seafood be treated at minus 20 degrees for 24 hours and longer or at 70 degrees and higher.

A problem is that the product value for frozen slices of seafood is said to be 60 to 70 percent that for their untreated counterparts due to color changes and lowered resilience.

Anisakis can also be removed with tweezers and other tools through visual inspection, but the manual labor required is not suitable for mass production.

With an eye on processing in large numbers for commercial purposes, the development of pulsed power equipment with a conveyor belt will start.

Whether the method is effective as well in other kinds of mackerel, yellowtail, squid and other sorts of seafood popular for being eaten raw will also be examined.