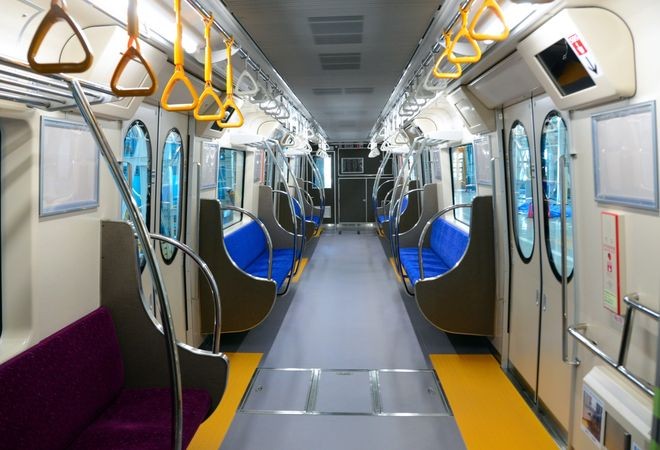 A wheelchair space is set aside in each train car on the Sendai city-run Tozai subway line in 2014. (Asahi Shimbun file photo)

The transport ministry is calling on rail companies to consider alternative ways to assist disabled riders, after an advocacy group criticized that in-station announcements lead to their victimization.

When railway station staff help passengers with disabilities get on and off trains, they announce their locations. But that can aid assailants in pinpointing the locations of vulnerable people they can target.

The Japan National Assembly of Disabled Peoples’ International (DPI-Japan) submitted a request in July to the transport ministry that asked it to address the issue, after gathering stories of women who have been stalked and sexually harassed because of station announcements that specify their car numbers and destinations.

“We cannot disembark from trains without wheelchair ramps, so we are unable to flee on our own,” said a 52-year-old Tokyo woman who uses a wheelchair and has been stalked herself while taking transit. “It is painful to imagine the feelings of the victims.”

The woman contacted some 30 individuals and about 12 shared their stories publicly to help make their case to officials.

One wheelchair user asked station staff not to announce her location because most passengers late at night are men. But her request was rejected, and her car number was shared.

A man in a suit approached her when she was near the train doors and said, “I’ve found you here.” He stood just behind her and humiliated her with questions about things like asking her what color of underwear she was wearing.

In a separate case, a man badgered a woman after overhearing a rail staffer’s message that spelled out her destination.

“I will disembark at the same station. Why don’t you go with me?”

Another said she asked for “help” in a train in this kind of situation, but no one there attempted to help her.

One rider was even rebuked by a stranger for “heading for Shinjuku at this hour, though you have disabilities.”

Train crew and station staffers frequently share information about disabled passengers so they can assist them in riding the trains safely and easily.

This is because disabled riders can be difficult for crew members to spot in busy crowds. Staffers also need to ensure no problems arise when individuals with disabilities get on or off trains.

Some rail operators ask passengers beforehand whether they can make announcements about them. But the woman who interviewed riders who have been harassed noted that it is “hard to say no when asked that way.”

Victims have demanded in the past that railway corporations and station staffers ensure the information being shared is not heard by others. But they are typically met with negative responses, such as, “You cannot ride if that is so.”

With no signs of improvement, the victims sent their request to DPI-Japan and asked it to reach out to the transport ministry in mid-July.

“Victimized women are suffering from deep mental scars,” said Satoshi Sato, 54, secretary-general of DPI-Japan. “We would like other passengers to learn about their real situation.”

One visually impaired person said the announcement about them “offered a sense of relief, since we can only take advantage of auditory information.” But the group decided to make a submission to the government after considering the reports of women who were harassed.

The transport ministry summoned more than 60 rail operators from across Japan on Aug. 18 to an online session where they listened to the accounts of victims.

“It is totally unacceptable that some people misuse measures taken for safety,” a ministry representative said. “Railroad companies should take steps as early as possible and devise means to enable all passengers to ride trains securely.”

According to DPI-Japan, some railway firms already rely on other communication methods, such as two-way radios, telephone calls, and even flashing lights set up along platform fences.