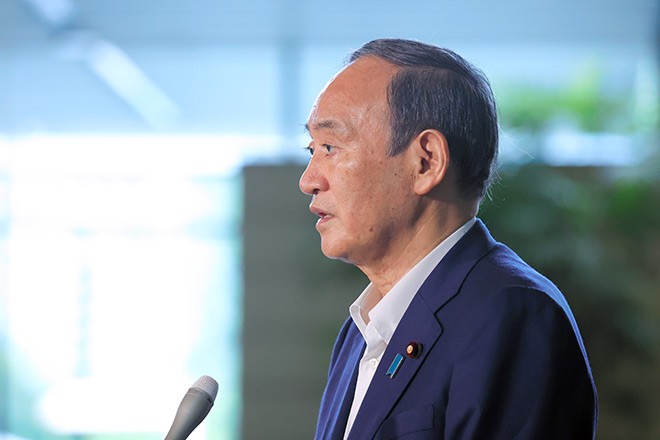 Prime Minister Yoshihide Suga tells reporters on Sept. 3 that he will not run in the Liberal Democratic Party presidential election. (Koichi Ueda)

Few ruling Liberal Democratic Party leaders saw the bombshell coming, when Prime Minister Yoshihide Suga said on Sept. 3 he would not run in the party presidential election set for later this month.

Suga met briefly with reporters after the LDP executives' meeting and said he wanted to focus on containing the novel coronavirus pandemic.

"A huge amount of energy would have been required to deal with the pandemic and also conduct party presidential campaign activities," he said. "I felt it would have been impossible to do both so I had to decide on one of the two."

However, Suga did not take any additional questions from reporters.

Top LDP leaders expressed shock at Suga's decision to bow out of the election.

"To be honest, I am very surprised," LDP Secretary-General Toshihiro Nikai told reporters.

He added that he was not aware of what Suga was planning to say before entering the meeting room.

Tsutomu Sato, the chairman of the LDP General Council, said, "I am extremely surprised. I was not consulted beforehand."

Suga's term as LDP president ends on Sept. 30, and he intends to step down as prime minister after a new party head is chosen on Sept. 29.

He had faced greater criticism in recent days even from LDP factions that had long backed him in response to moves he was reported contemplating, including replacing top LDP executives as well as dissolving the Lower House and calling a snap election in mid-September.

But at the Sept. 3 LDP executives’ meeting, Suga said he would not be replacing the executives as he initially announced.

Fumio Kishida, a former foreign minister and LDP policy chief, has already announced his intention to run in the party presidential election that will officially begin on Sept. 17.

Asked by reporters on Sept. 3 about Suga's withdrawal, Kishida said he would comment after confirming the circumstances.

Meanwhile, Taro Kono, the state minister in charge of administrative reform who also coordinates the central government effort in getting out COVID-19 vaccines, told reporters on Sept. 3 that he would consult with colleagues and senior lawmakers about whether to run in the LDP presidential election. Kono belongs to the LDP faction headed by Finance Minister Taro Aso, but has also been on close terms with Suga.

Plunging approval ratings for the Suga Cabinet due in large part to its weak handling of the COVID-19 pandemic had triggered criticism from among younger LDP lawmakers that the party could not win the Lower House election that must be held this autumn with Suga at the helm.

After announcing that he would replace top LDP executives before the Lower House election to refresh the party's image, Suga met with Nikai, one of those who would be axed, on Aug. 31 and indicated that a Lower House dissolution in mid-September and the calling of a snap election was one option he was considering.

But Suga was forced to retract that comment the following day when fierce criticism emerged within the LDP that the move was intended to only push back the party presidential election.

In addition to the handling of the pandemic, Suga also projected an image as a weak political leader because his LDP continued to lose in parliamentary by-elections and the Tokyo metropolitan assembly election under his watch.

The last straw was the defeat of the candidate personally backed by Suga in the Yokohama mayoral election on Aug. 22. The loss came in Suga’s own backyard since he represents a Lower House district in the city west of Tokyo.

A national survey by The Asahi Shimbun in August had the approval rating for the Suga Cabinet at 28 percent, the first time the figure fell under 30 percent since Suga became prime minister in September 2020.

Suga succeeded Shinzo Abe, who announced in August 2020 that he was stepping down for health reasons. Suga had supported Abe as chief Cabinet secretary, serving a record seven years and eight months or so.

Nikai quickly expressed support for Suga in the party presidential election and that triggered other LDP factions to jump on his bandwagon and virtually assured his victory before the campaign officially began.

While Suga said he would give priority to dealing with the novel coronavirus pandemic after becoming prime minister, he was often criticized for the slow response by his administration.

The decision to suspend the Go To Travel tourism promotion campaign was delayed in part because Suga was a strong proponent of the program.

When Suga turned his eyes to vaccines as the key to dealing with the pandemic, he promised in May to speed up the process so 1 million daily doses would be administered.

But the emergence of the stronger Delta variant contributed to further increases in new COVID-19 cases and on Aug. 25 his administration added eight prefectures to those under a state of emergency, bringing the total to 21.

While Suga at one time thought the Tokyo Olympics might give his administration a boost among the public, the failure to restrain new COVID-19 cases led to the holding of the events without spectators.