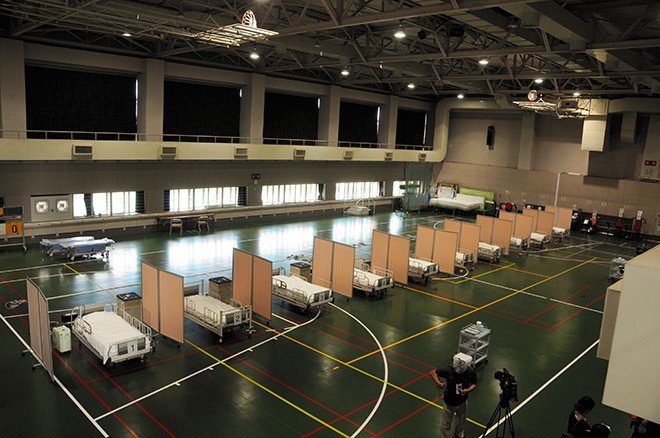 Ten beds are lined up at an oxygen station for COVID-19 patients in Ageo, Saitama Prefecture, on Aug. 31, a day before it opened for operations. (Shun Niekawa)

Local governments have set up at least 28 makeshift facilities for COVID-19 patients waiting for hospital beds in 12 prefectures after some people left to recover on their own at home died.

The move comes as hospitals buckle under the severe strain caused by the highly contagious Delta variant and its rapid spread.

The temporary facilities, which include oxygen stations, take in patients requiring hospitalization and provide medical treatment until hospital beds become available again. Hotels run by private companies are being used to house patients in some cases.

According to the health ministry’s count as of Aug. 30, Tokyo had set up 14 such facilities with a total of about 300 beds.

They include the Shinagawa Prince Hotel in Minato Ward, “Tomin no Shiro” (Tokyoites’ castle), a place in Shibuya Ward for residents to engage in lifelong learning, and other facilities on the premises of medical institutions.

Osaka Prefecture has secured some 20 beds at four makeshift facilities for patients on waiting lists for hospitalization.

But it has not disclosed where they are located.

Ten such facilities are in operation in Hokkaido as well as in Okinawa and eight other prefectures.

Other prefectures are planning to open these types of facilities this month.

Some municipalities have set up similar facilities on their own, according to the ministry.

Tokyo as well as Ibaraki, Osaka, Fukuoka and Nagasaki prefectures have begun providing antibody cocktail therapy to patients with mild and moderate symptoms at accommodation facilities to reduce their risk of becoming seriously ill. Saitama Prefecture is also planning to follow suit.

As of Aug. 25, 118,229 COVID-19 patients are listed as recovering at home and 32,162 are waiting to be admitted to hospitals nationwide, according to the ministry. The counts exclude those in Saitama Prefecture.

Some patients died after their conditions suddenly worsened while recuperating at home or waiting to be hospitalized.