Tokyo apologizes over dumping of tainted water by U.S. military 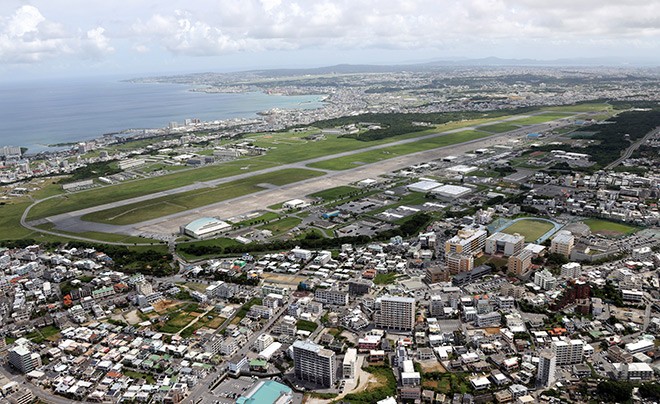 GINOWAN, Okinawa Prefecture--Central government bureaucrats apologized to the mayor here on Sept. 2 over the U.S. military dumping of water contaminated with a dangerous chemical into the city sewage system.

The bureaucrats from the Defense and Environment ministries in Tokyo met with Ginowan Mayor Masanori Matsugawa and apologized for causing concerns among local residents.

U.S. military officials have claimed the level of PFOS in the water was safe, but Japanese officials said the water could not be considered as such.

Ginowan city officials requested the Tokyo ministries explain the dumping as staff working on behalf of the ministries in Okinawa Prefecture had no details about what the U.S. military did, the officials said.

It is highly unusual for bureaucrats from Tokyo to visit Okinawa to deal with problems related to the U.S. military based there.

“We extend our deepest apology," Makoto Ikeda, the head of the environmental policy division within the Defense Ministry, told Matsugawa, during the first few minutes of the meeting, which were open to the media.

"We also consider it extremely regrettable that the water was dumped so suddenly.”

Ikeda added that the U.S. military would be asked to not release such contaminated water in the future and that discussions would be held with the United States to deal properly with the issue.

Matsugawa met with reporters after his meeting with the two bureaucrats and said he was "able to confirm that the central government also did not have any information about (the release of the water) and that it also did not think the water was safe.”

Production of PFOS was banned, in principle, in Japan in 2010. In 2020, water quality guidelines were established for drinking and river water that called for the combined presence of PFOS and other substances to be kept at under 50 nanograms per liter of water.

The U.S. military was criticized for unilaterally dumping the water into the sewage system because discussions were ongoing between Japan and the United States about how to handle the matter at that time.

U.S. military officials subsequently explained that they proceeded with the release since storage tanks on the base were close to capacity and there was the possibility of spillage in the event of heavy rainfall.

The U.S. military announced that the 64,000 tons or so of water released contained less than 2.7 nanograms of PFOS per liter of water, which they claimed meant the water was safe.

There are no rules at the central or local government levels about releasing water containing PFOS into the sewage system, so the central and municipal governments have no way to evaluate the U.S. military water quality figure.

Ordinarily in Japan, PFOS is incinerated by a company specializing in the procedure. According to the Environment Ministry, “99.999 percent” of the PFOS can be broken down when it is heated at temperatures in excess of about 850 degrees.

Ginowan officials said the U.S. military had turned to such specialist companies in the past to handle the PFOS. However, U.S. military officials explained that one reason the water was to be dumped directly into the sewage system was because of the excessive financial burden of that treatment process.

The contaminated water released from the Futenma base will flow into the ocean untreated because the prefectural government sewage processing facilities are not equipped to reduce the concentration of PFOS.

Okinawa prefectural and Ginowan officials are also concerned the PFOS could accumulate in fish because the chemical does not break down significantly in nature.

(This article was written by Mika Kuniyoshi and Maho Fukui.)