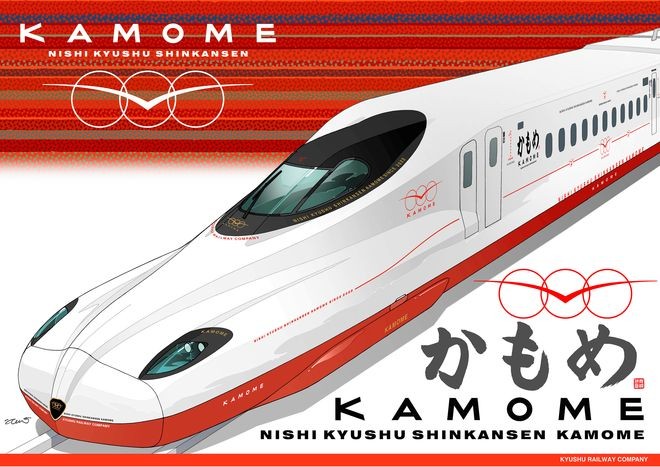 FUKUOKA--The look of a Shinkansen bullet train set to debut on the Nishi-Kyushu route of the Kyushu Shinkansen Line in fall 2022 is intended, according to its designer, to resemble "a hotel that is mature and friendly."

The route, also known as the Nagasaki Shinkansen line, will partially open between Nagasaki Station and Takeo-Onsen Station in Saga Prefecture.

The train's exterior features its name Kamome (seagull) written in hiragana with bold brushstrokes by the company president, Toshihiko Aoyagi, as well a red stripe in the corporate color of JR Kyushu.

The overall design is the work of Eiji Mitooka, who also was responsible for the look of the Nanatsuboshi (Seven Stars) luxury sleeper train.

The new train is based on the N700S series Shinkansen introduced in 2020 and bears the symbol of a seagull in flight overlapping on three interlocking rings.

Reserved seats are arranged in two rows, with two seats on each side of the aisle. The seats in cars No. 1 through No. 3 feature designs themed on chrysanthemum, lion and arabesque.

"Conventional JR Kyushu train cars are edgy, but the Kamome is designed like a hotel that is mature and friendly," the designer said.

The Nishi-Kyushu route will eventually connect Nagasaki Station and Shin-Tosu Station in Saga Prefecture on the Kyushu Shinkansen Line.

Construction of the section connecting Shin-Tosu and Takeo-Onsen stations has yet to start due to stalled negotiations between the central and prefectural governments over construction specifications.

Once the Nishi-Kyushu route becomes partially operational, the railway company plans to provide a relay service for passengers to transfer at Takeo-Onsen Station.