With Suga out of picture, a crowded field emerges in LDP 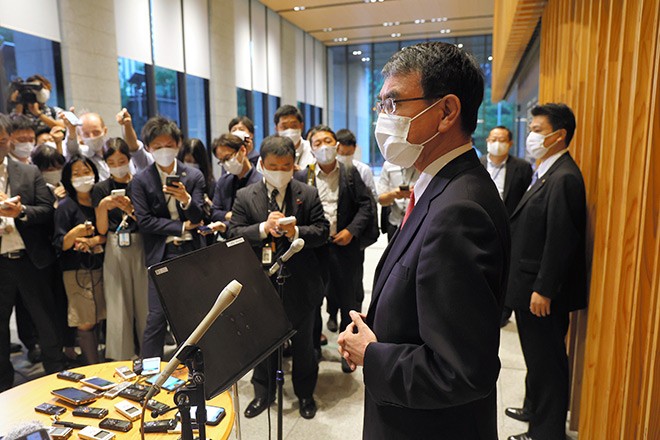 Prime Minister Yoshihide Suga’s out-of-the-blue decision Sept. 3 to step aside triggered a flurry of moves by lawmakers in the Liberal Democratic Party eager to grasp what they view as a golden opportunity to become the nation’s next leader by running in the party’s leadership election this month.

Taro Kono, the state minister in charge of administrative reform, confided in associates that he had decided to throw his hat into the ring.

Fumio Kishida, a former foreign minister and LDP policy chief who is the only lawmaker to formally announce his intention to run, will now be forced to rethink his campaign strategy as until now it was focused solely on taking on Suga.

In a TV news program on Sept. 4, Kishida expressed deep concern about the public’s waning trust in the government due to frequent reports in recent days of Suga changing his mind about whether he was going to dissolve the Lower House and call a snap election.

Kishida, 64, was asked on the TV program about the consumption tax rate, now at an unpopular 10 percent, and he indicated he would not change it if he emerges victorious.

That could set up a major point of contention in the Lower House election that likely will be held after October as some opposition parties have pledged they would slash the rate.

Kishida has already announced a package of measures he would implement, including one costing several tens of trillions of yen to tackle the pandemic.

He told the interviewer he would issue bonds to pay for the massive COVID-19 spending package. But at the same time, he called for the need to exercise fiscal discipline and stability, in line with his statement to stay the course on the consumption tax rate hike.

Kishida started out in his quest for ultimate power with the aim of gaining the support of disgruntled younger LDP lawmakers who felt they would lose their seats in the Lower House election if Suga remained in charge.

But if the ever-popular Kono, 58, enters the race, that strategy would probably go up in smoke as younger LDP lawmakers are deemed more likely to support him, given that he is closer in age to them than Suga, 72.

Shigeru Ishiba, 64, a former secretary-general and defense minister who ran against Suga in the LDP presidential election a year ago, said Sept. 3 he would decide whether to run in the party presidential race yet again after he consults with his faction colleagues.

Sanae Takaichi, 60, the former internal affairs minister, reiterated Sept. 3 that she is still intent on entering the party’s leadership contest with her promise to pursue the economic policies of Suga’s predecessor, Shinzo Abe, and promote “New Abenomics.”

Other lawmakers have also said they were thinking about running now that the incumbent is no longer in the picture.