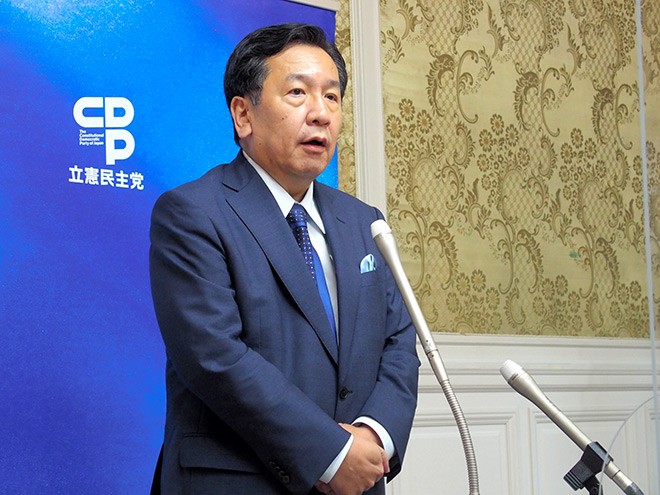 Yukio Edano, head of the opposition Constitutional Democratic Party of Japan, meets with reporters on Sept. 3 after Prime Minister Yoshihide Suga announced he was not running in the Liberal Democratic Party presidential race. (Hideki Kitami)

Prime Minister Yoshihide Suga threw a spanner in the works as far as the opposition camp was concerned with his Sept. 3 announcement he would step aside and not seek re-election as head of the ruling Liberal Democratic Party.

Many opposition lawmakers were desperately hoping that Suga would try to hang on, viewing him as particularly vulnerable, as demonstrated by grim public approval ratings over his handling on the pandemic, in the runup to the Lower House election that must to be held by this autumn.

“I really wanted Suga to stick around for just a while longer,” said a dismayed younger member of the main opposition Constitutional Democratic Party of Japan (CDP) on Sept. 3.

“If the election was being held with Suga at the helm, we would have said, ‘Thank you very much,’” said a high-ranking CDP official somewhat caustically. “But now that there will be a change in prime minister (before the election), it becomes less clear if voters will still be clamoring for the opposition or whether they will simply welcome a ‘quasi-change in government.’”

CDP head Yukio Edano wasted no time in accusing Suga of acting irresponsibly at such a critical time, given that lawmakers across party lines have their hands full trying to contain the COVID-19 pandemic.

Key officials in the CDP and other smaller opposition parties now realize they will have to hit the reset button in terms of election campaign strategy.

The political process was thrown into further disarray with the fact that a new LDP leader will mean an extraordinary Diet session will have to be held after the LDP party presidential election to formally select a new prime minister. Whoever succeeds Suga as head of the party, and therefore becomes prime minister, will have the opportunity to give an address about where he or she wants to take the nation.

While that would give opposition party leaders an opportunity to pepper Suga’s successor with questions, this scenario was precisely what they had hoped to avoid.

In the event, these procedures would make impossible for the Cabinet to decide to hold a crucial Lower House election on Oct. 17 under a legal provision that allows for such a move when the term of Lower House members is approaching its deadline, which is now the case.

With the Diet in session, the new prime minister would be allowed to dissolve the Lower House and call a snap election. But a provision in the Public Offices Election Law states that a snap election must be held within 40 days of the dissolution. If the chamber is dissolved on Oct. 21, when the term of members ends, the Lower House election could be held as late as Nov. 28.

Ruling coalition lawmakers would prefer for the election to be held as late as possible because a larger segment of the population will have been vaccinated against COVID-19 by then, which would resonate with voters weary of months of restrictions on their activities due to successive states of emergency.

Faced with the new political reality, opposition lawmakers, including the Japanese Communist Party, are planning to meet in the coming week to discuss election cooperation strategy and which candidates to field in the Lower House election to achieve their goal of seizing power.