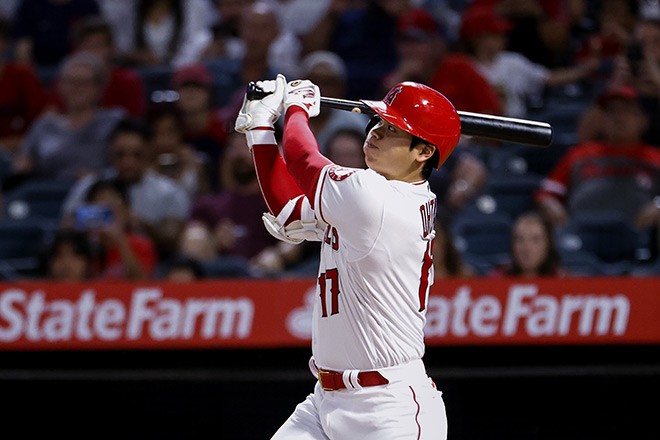 Los Angeles Angels' Shohei Ohtani watches his three-run home run during the sixth inning of the team's baseball game against the Texas Rangers in Anaheim, California, on Sept. 4. (AP Photo)

Ohtani connected for a three-run homer in the sixth inning, a 426-foot drive to right field to a chorus of “MVP!” chants. He homered on the same night Kansas City’s Salvador Perez homered twice to reach 40.

Ohtani needs four more homers to match the franchise record of 47 set by Troy Glaus in 2000. Of Ohtani’s homers this year, 25 have come at Angel Stadium, breaking the single-season team mark of Glaus, who had 24 at home during his big season.

Ohtani’s home run came a day after he pitched seven impressive innings to beat the Rangers 3-2.

Angels manager Joe Maddon said Ohtani had no hesitation about being in Saturday’s lineup.

“We’re on the same wavelength,” Maddon said. “I know he can do it. He’s got to tell me where he’s at physically. (It’s) absolutely or something very positive. And he showed it and had some really good swings. You got to be tired after (117) pitches.”

Suarez (6-7) punched his glove several times and kept the ball from the final out in his first career complete game in the majors.

The 23-year-old lefty struck out eight, walked none and threw 100 pitches. The only run he permitted came in the ninth when Leody Taveras reached on an infield single to start the inning and later scored on Adolis Garcia’s groundout.

“I feel truly happy,” Suarez said through an interpreter. “I was out there in the eighth inning. I couldn’t believe I was still out there. It was very exciting.”

Kolby Allard (3-12), who grew up in Anaheim, retired the first seven batters of the game. Juan Lagares hit a solo home run in the third.