Sachets scented with fragrances produced by Buddhist monks and local residents in Hiraizumi based on a 1,000-year-old formula are proving popular. (Hideyuki Miura) 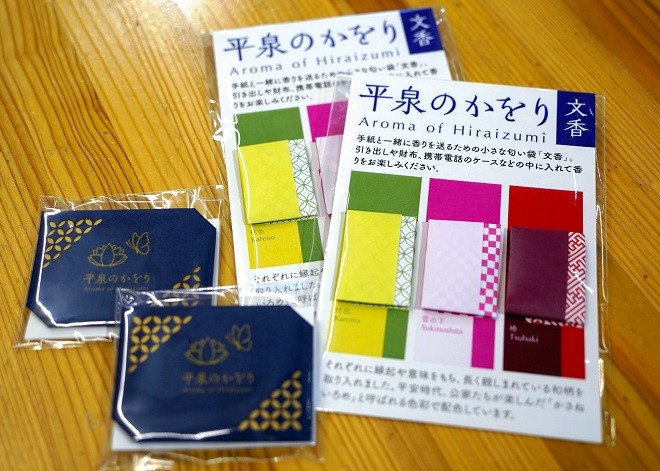 Fumiko, right, and Meishiko sachets are scented with fragrances based on an ancient formula developed in the Oshu-Fujiwara era. (Hideyuki Miura)

HIRAIZUMI, Iwate Prefecture--Buddhist monks teamed up with local residents here to mark the 10th anniversary of UNESCO's recognition of World Heritage cultural sites by offering sachets scented with fragrances recreated from a formula developed in the Oshu-Fujiwara era from the late 11th century to the late 12th century.

Available in two varieties, Hiraizumi no Kaori sachets are proving popular among tourists and locals alike.

Fumiko are meant to be enclosed in a letter to deliver a delectable aroma, while the Meishiko variety is intended to be placed inside a card holder to transfer the aroma to business cards.

The sachets were developed by Horei Nanto, 42, a senior priest at Motsuji temple, in cooperation with local residents. The fragrances are blended from six aromatic ingredients based on a formula for "kurobo" scents used for celebrations and other big occasions during the Heian Period (794-1185).

In 2012, tourists visiting Hiraizumi totaled 2.64 million. But the figure plummeted to 900,000 in 2020 because of the COVID-19 pandemic. As a result, the tourism industry remains in the doldrums and many memorial events have either been canceled or postponed.

"Even though you can't come to Hiraizumi because of the pandemic, it would make us happy if you ponder how prosperous it was 1,000 years ago by enjoying the scents from the Oshu-Fujiwara era," Nanto said.