Young Turks calling the shots as LDP race heats up 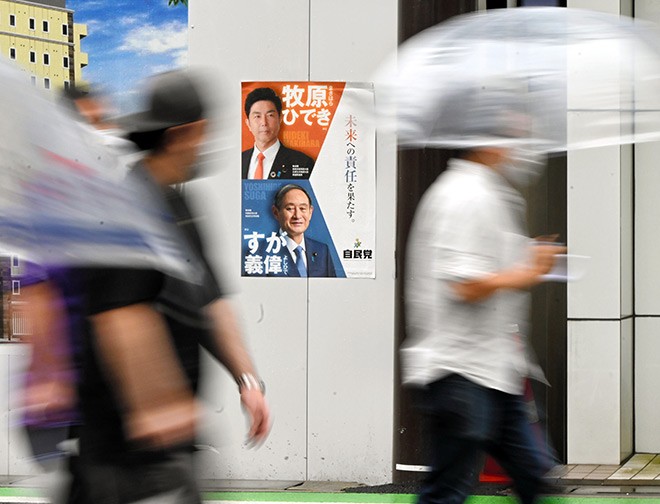 Rookie and junior lawmakers in the ruling Liberal Democratic Party for once are playing a key role in the party's leadership race as they fret about their chances of being re-elected when their current terms as Lower House members end in October.

For them, the race this month is all about who best can pull that off, and for that to happen, they say a "fresh face" is vital.

The number of LDP legislators who have been elected three or fewer times stands at 126, accounting for about 45 percent of the party's strength in the Lower House.

Most of these lawmakers have yet to build robust support bases in their constituencies as they secured their Diet seats riding on the coattails of Shinzo Abe, who spent nearly eight years in office, making him Japan's longest-serving prime minister. He resigned a year ago citing ill-health.

As a result, the overriding concern of younger members in the Sept. 29 party presidential vote has been to side with whichever candidate they believe can best help them return to the Diet.

Yoshihide Suga, Abe’s successor, abruptly announced his resignation Sept. 3 largely due to pent-up frustration among junior LDP lawmakers about his ability to lead the party forward in the next Lower House election, seeing him as a liability.

Suga’s public approval ratings plunged to a record low in recent polls over his perceived inept handling of the novel coronavirus pandemic.

“Any candidate will be fine with me as long as that person helps me win the Lower House election,” said one junior legislator.

Opinion polls suggest that Taro Kono, the minister in charge of administrative reform who also oversees the government’s vaccine rollout program, and Shigeru Ishiba, a former defense minister and secretary-general known for his expertise in a range of policy issues, were two favorites to win the leadership election.

Kono, 58, enjoys strong support from junior and mid-level colleagues. Followers of his Twitter account top 2.35 million. Always eager to communicate with the public, he often responds to tweets.

But LDP veterans will never endorse Kono due to his reputation for ignoring the custom of trying to build consensus within the party or the government before announcing a policy. A good example is when Kono, as defense minister under Abe, abruptly pulled out of the proposed land-based Aegis Ashore missile defense system deal with the United States, surprising even the prime minister.

Ishiba, 64, has contested the party leadership several times and is popular among LDP rank-and-file members and officials at local levels. Their votes matter. Of a total of 766 votes to be cast in the presidential election, half will be cast by local members.

“I plan to endorse him, given his popularity in local areas,” said a junior legislator said.

But he is deeply unpopular with senior LDP lawmakers. Ishiba is an outspoken critic of Abe, who was embroiled in a string of scandals in which friends and constituents benefited as a result of the use of public funds. Ishiba signaled he may reopen investigations into the scandals if he takes power.

Abe, still influential even after stepping down as prime minister, and many members of the faction led by his longtime crony and ally, Finance Minisrer Taro Aso, are loathe to see Ishiba taking the top post.

But LDP heavyweights cannot afford to ignore mounting calls from junior lawmakers to elect a candidate who can appeal to voters as the party’s new face in the Lower House election.

“It will be impossible for the head of a faction to force other members to back his personal choice,” a former Cabinet member said.

Senior faction members say they have yet to decide whether they, as a faction, will vote for a single candidate or allow individual members to vote according to their preference.

(This article was written by Kazutaka Kamizawa, Asako Myoraku and Masahiro Iwao.)