GOHAN LAB/ Mitsumame: Secret to agar jelly dessert’s silky texture is all about the gel 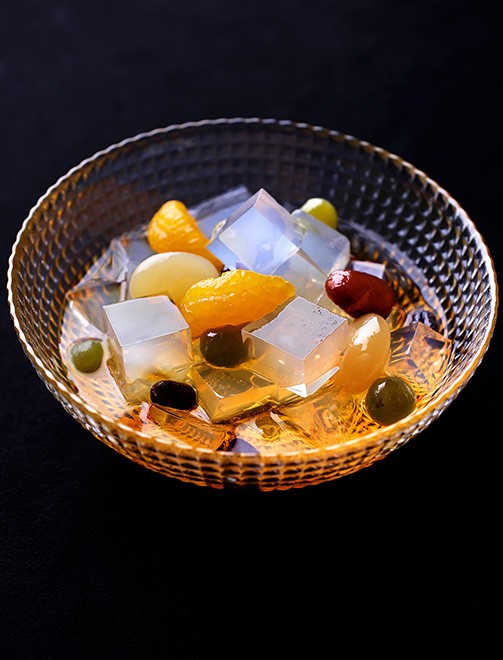 Our sweet of the week is mitsumame, a Japanese dessert featuring agar (kanten) jelly. You’ll find its silky texture and mild sweetness delights your taste buds.

We used caster sugar to make its sweet syrup, but black syrup (kuromitsu) made of brown sugar derived from the juice of sugarcane will taste just as good.

While red field beans are usually used in mitsumame, we used store-bought amanatto, beans simmered in sugar syrup and dried.

Since amanatto are covered with sugar and taste rather sweet, we rinsed them to soften the sweetness and remove the rough texture on their surface.

You can give the recipe a twist by sealing amanatto beans and mikan citrus in the agar jelly and forgoing the syrup.

After heating and dissolving the agar in water, mix in 50 grams of sugar and let it cool to a large degree. Add amanatto and mikan, mix them together and cool the mixture in a flat container.

Adding sugar turns the agar jelly more transparent and makes your dessert nicer to look at.

Agar is like gelatin in the way it melts when heated and sets when cooled. But the temperatures at which it does so differ from gelatin, as shown in the Cookery Science section. Understanding its characteristics will help you master cooking agar.

Though we chose handy agar powder for the recipe, agar is sold as dried sticks or strips as well.

When jelling 450 to 600 milliliters of water, use 4 grams of agar powder, or one (about 8 grams) stick agar or 24 to 26 (about 8 grams) of strip agar, advises Matsuki Kanten Sangyo, an agar manufacturer based in Nagano Prefecture.

When using agar in stick or strip form, tear it into an appropriate size, reconstitute it in a generous amount of water for 10 to 30 minutes, and squeeze the water out before using.

“While agar powder is suited to be heated and dissolved to jell the liquid, reconstituted agar in stick or strip forms can be enjoyed in soup or as an ingredient for salads,” said a Matsuki Kanten Sangyo spokesperson.

About 100 kcal and 0 gram salt per portion

1. Pour 600 ml water in pot, add agar powder and mix thoroughly. Place on medium heat and bring to a boil, then simmer for 3 minutes on low heat (PHOTO A).

2. Place pot in bowl with water and cool to a large degree. When rising steam has subsided somewhat, pour mixture in flat container (PHOTO B) and cool for about an hour in fridge until it sets.

3. To make syrup, place sugar and 1 Tbsp water in pot and mix well. Place on medium heat and turn off stove when mixture turns light brown. Leave for a few tens of seconds to darken color with residual heat. Add hot water (PHOTO C), turn on heat again and dissolve sugar. When dissolved, turn off heat and cool in pot.

4. Rinse amanatto beans and drain. When agar jelly has set, remove from container and cut into dices 1 to 2 cm on a side. Serve in bowl. Top with amanatto and mikan sections and pour syrup.

Akiko Watanabe is a cooking expert specializing in Japanese cuisine.
Midori Kasai is a professor at Ochanomizu University and former chairwoman of the Japan Society of Cookery Science.

Mix 1/2 tsp agar powder and 100 ml water in a pot and place on heat. When content comes to a boil, turn down to low heat and simmer for 2 to 3 minutes.

Add 200 grams boiled and sweetened canned adzuki beans and a pinch of salt. Boil down for 2 to 3 minutes while mixing as if peeling off mixture from the bottom of the pot. Cool to a large degree, pour in container and set in fridge.

Since hot agar liquid is runny, the heavy adzuki will settle at the bottom if poured in container while still hot and the jelly will set in two separate tiers. The mixture should be poured in the container when it has cooled to some degree.

Agar is a substance obtained from marine algae. Agar dissolves at temperatures of 80 degrees or higher, although people generally dissolve it by bringing it to a boil.

The agar liquid turns into a gel and sets at around 35 degrees. Its viscosity suddenly increases near 40 degrees.

When acid is added to the liquid and heated, the agar breaks down and the liquid no longer sets. If you wish to add fruit juice, do so after the agar liquid is cooled to around 60 degrees.