VOX POPULI: Um, where’s the heat? Feeling out of sorts in Tokyo as temps dive 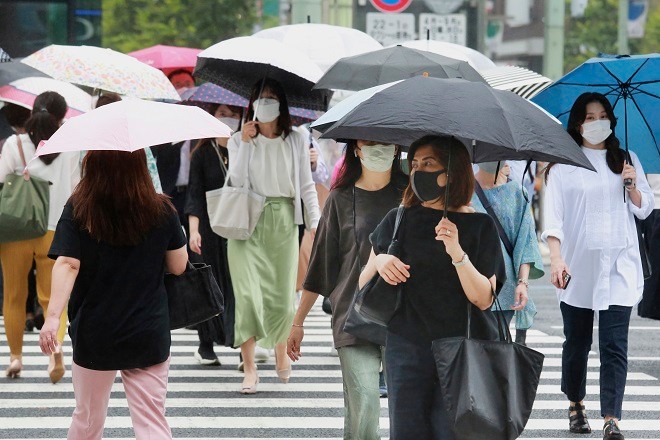 People wearing face masks to protect against the spread of the novel coronavirus walk across a street in Tokyo on Sept. 1. (AP Photo)

The weather in Tokyo has been damp and chilly, and I instinctively reached for a long-sleeve shirt and thick socks the other day, even though it's still too early to switch to a cool-weather wardrobe.

A "cold temperature warning" has been in effect since last weekend in the capital. This certainly doesn't feel quite right. Normally, summer's heat should still be lingering.

Over the last few days, however, Tokyo's average temperatures have reportedly remained 5 to 6 degrees below normal.

The Japan Meteorological Agency (JMA) explained that a cold temperature warning is issued even in summertime if potential damage to crops is anticipated.

Since early morning yesterday, photos of snow-capped Mount Fuji have been posted in rapid succession on social media, with captions proclaiming, "Snow on Mt. Fuji!" and "It's come early this year."

According to observation data from atop Fuji, temperatures dipped below freezing again during the night.

However, snow accumulation was confirmed only on the Shizuoka Prefecture side of the mountain.

"Unless we have a visual confirmation of snow from the Yamanashi Prefecture side as well, we cannot officially declare the season's first snow," noted the Kofu Local Meteorological Office of JMA in the prefecture. "And cloud cover prevented us from seeing Mount Fuji (from our side)."

Had it been visible, the season's first snowcap on Mount Fuji would have been announced about a month earlier than usual.

A "senryu" cynical haiku by Taiji Yoshizawa printed in The Asahi Shimbun's senryu section last weekend that caught my attention went to this effect: "Hot sake/ The moment I flipped the calendar."

Looking up a "saijiki" almanac of seasonal words at hand, I also came across this haiku by Soku Yamaguchi: "Autumn has come/ Feeling the silky texture of tofu on my tongue."

These days feel as if autumn has arrived abruptly, skipping the usual post-summer interval of heat.

This weather would be perfect for sipping hot sake and savoring popular winter delicacies such as "yudofu" (tofu hot pot) or "oden" (soup of fish cakes, vegetables and other ingredients).

Nationwide, however, many regions are still in the throes of scorching heat. And by later this week, Tokyo is also expected to get its summer sun back.

The change of seasons brings unexpected temperature fluctuations that aren't good for your health. I hope everyone takes care of themselves.